Making the jump to SLR with the Nikon D3000 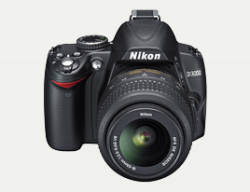 Are you ready to make the jump to SLR but not ready to shell-out loads of cash just to get started?  If price is the only issue then the Nikon D3000 could be the answer you were looking for. Or you might consider buying Nikon D300s which is considered as the best semi-professional DSLR camera.

The gap between “point and shoot” cameras and DSLR is smaller than ever, and now is a good time to take the leap.

The Nikon D3000 is sold as a kit with an 18/55mm AF lens included.  It normally retails anywhere from around  $500 to $599.  Oddly enough, the least expensive kit also includes a camera bag and a 2 gig storage card .  These are mostly found in large retail outlets like Wal-Mart so you should look around and compare prices.

One of the big selling points of the Nikon D3000 is the large selection of compatible lenses and accessories already available from the Nikon family.   This gives you the time to expand your creative horizons and when you’re ready to move up the “food chain” you won’t be stuck with a lot of expensive equipment that you’ll never use again.

Of course, the generous 3” screen and the 3fps burst doesn’t hurt either.  And it all comes in an attractive package that weighs less then two pounds (with lens and battery included).

Like most cameras, the D3000 lets you select different scene modes to assist you when shooting under certain conditions.  The modes let you quickly select the correct exposure settings to fit your situation rather than having you manually set up the camera.  They also come in handy when the shooting conditions change quickly, leaving you little time for calculations.

There are two things to like about the D3000 scene selections:   first, there are only six to choose from which makes the decision process much easier; next, the settings are right there on the mode dial.  No more searching through the menu for scene settings and hunting through a long list of options while the action passes you by.

The available scene selections are portrait, landscape, child, sports, close up and night portrait.  The icons on the dial are clear and easy to remember and with a quick turn of the dial, that setting you were using to take great photos of the mountain landscape can be changed to catch the action of the skiers zooming down it.

Another feature on the dial is the guide mode which is a valuable tool to help you learn about the functions of the camera and to help you progress gradually to the manual functions.  It’s also useful if you just want to use the camera without having to read through the manual right away.

Next to the auto feature on the dial, is a quick setting for turning off the flash when you don’t want it — like in museums or other places where a flash is not allowed.

When you are ready to make the jump from auto to manual, the dial has four settings to make the transition easier: P – programmed auto, S – shutter priority auto, A – aperture priority auto, and M – manual, which allows you full control over both the shutter speed and aperture.

The different manual modes allow you to practice with each exposure setting separately, so you can get a feel for what each one does, and helps to prepare you for going into full manual mode.

Other features, “un-features” and a “where’s my feature?

The D3000 has a good selection of features that can be used to improve the look of your photos. D-lighting can be activated when objects are backlit and would otherwise leave your subject underexposed.  The grid option adds a grid to the viewfinder, so you can keep your pictures level and help you compose your frame.

One of it’s more useful features is the ability to name pictures and files ahead of time.  This is especially helpful if you travel around a lot.  When you preview your pictures you can bring them up as a group of thumbnails or search the pictures by calendar date or file name.

One real handy feature on the D3000 is the RAW converter.  The RAW converter renders your pictures into a format that you can share immediately with friends.

In addition to the features, The D3000 has a few interesting “un-features” as well.  “Un-features” are, of course, features that are interesting but not really needed — like in-camera editing and retouch.  The reasoning for adding these features was that if you didn’t have time to edit after you down loaded to your computer, you could do it in the camera.

Personally, if you don’t have time to edit them when you download then you probably won’t do it in camera either.  Besides, it’s really difficult to do any serious editing on a 3” screen.  If I can find anything good to say, though, the edits are non-destructive to the original, and the edited version appears as a separate picture (taking up valuable storage space, of course).

The D3000 also has a few interesting special effects (but, un-features none-the-less) like an overlay feature, similar to a double exposure, and the ability to make small stop-motion movies.

So with all these wonderful functions, what more could you ask for?  Well — the ability to capture video would have been nice, but for some reason the developers at Nikon chose to leave this feature out.

After all, even the cheapest digital camera has the ability to make videos, so the absence of this one feature does leave a little “hole” where complete happiness would have been. I would have easily traded in the edit, retouch and special effects for the ability to capture video.

Besides the nice selection of Nikon lenses, the camera can accommodate several other accessories like: an external flash, a remote control and a video cable to view pictures on your television.

The D3000 can accept normal SD cards, SDHC (the new, High Capacity Secure Digital cards) and even the Eye-Fi SD cards which allow you to send pictures from your camera directly to your computer on a wi-fi system (which is why the RAW converter is so useful).

All in all, the camera does well to meet or exceed the needs of the photographer who needs to move up from a fixed lens camera to the world of DSLR.  The camera has a good feel to it and it’s response is great.  It does hang a little when you’re shooting in RAW (especially in burst mode) but a good, high-speed SD card could fix that.

Over all,  I would give the D3000 an A for performance and “likeability”, a B-, for not thinking that people would want the video capture function, and an A+ for the price and color quality.

I really like the Nikon D3000 DSLR — but for now, I guess, I’ll just have to use my point-and-shoot camera any time I need to take video.