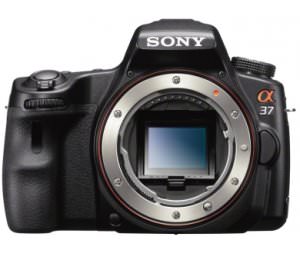 During a period of less than two years, Sony has brought 7 of its SLT DSLR camera to the market; however, with the release of the new SLT-A37, the Sony line-up is much more logical. The A37 replaces the older A35, so the A37 is the entry-level model; the Sony A55, A57 and A65 occupy the mid-range; and the A77 is the high-end camera. Presumably, the A99 model, rumored to be released during the later half of 2012, will take the “head duck” position in Sony’s array of DSLR choices.

As Sony’s new entry-level offering, the A37 is competing with Canon’s EOS Rebel T3, Nikon’s D3000 and D3100 and the growing horde of interchangeable lens system (ILS) cameras, which are projected to double their sales during 2012. As with all its competitors, the Sony A37 is targeted at compact camera users who want a more serious digital photography experience and photography students who need an affordable DSLR to learn the basics, as they start preparing for a career.

The body size and design of the new A37 is virtually identical to the older A33 and A55. Sony has modified the handgrip, so it is a bit more prominent, which creates more space for the ends of the fingers. This is a comfort improvement that digital photographers who are shooting all day will appreciate.

Sony has designed the A37 with a 2.6”, 230,000-dot rear LCD, which tilts and flips. Not only does this feature expand the range of shooting angles with overhead and waist-level viewing, but also is welcomed when shooting in live view because focus maintains its speed, unlike many other DSLRs.

A nice, minor capability of the A37 is that it connects directly to Sony Bravia TVs via the HDMI port for playback. The port is located behind a rubber cover on the left side of the camera body. This space also includes a USB 2.0 connector.

Probably, the most compelling distinction of the Sony A37 (and all its SLT models) when compared to similar cameras is its fixed-mirror technology. Sony engineers have created a light-capturing-and-directing capability that provides specific advantages over typical DSLRs and ILS cameras. Because this technology works with an electronic viewfinder, light entering the camera goes directly to the image sensor. In a traditional DSLR, the light must first travel to a mirror, and then be reflected to the sensor.

The fixed-mirror technology in the Sony A37 also makes it definitely different, and more beneficial, than ILS, or “mirrorless,” cameras. With its fixed, semi-transparent mirror, the A37 is sending a steady stream of light onto the camera’s phase-detection auto-focus sensor. This results in faster AF when using any Sony or Minolta A-mount lenses. Plus, the AF maintains that speed in burst and movie modes. The Sony’s focusing mechanism also outperforms the moving-mirror system in the DSLRs at the same price point. Focusing is slower in those cameras because of the time required for the mirror to return to position.

It would seem to make sense, considering the entry-level market for the Sony A37, that it has a robust array of video functionality. It records 1080p245/60i HD video in AVCHD format, but also includes a number of very helpful features: built-in stereo microphones, wind-cut filter and the previously mentioned auto-focus in the movie mode. Sony has even added an external microphone port, which is actually a $100 competitive advantage over the Nikon D3200.