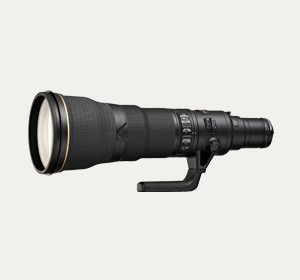 First spied at the 2012 London Summer Olympics, the Nikon AF-S 800mm f/5.6E FL ED VR lens was officially introduced during January 2013. Nikon didn’t build this lens just to impress photographers (and drain their bank accounts), but also to represent an innovative step forward in lens design that is likely to be seen in future Nikkor lenses.

First, this enormous lens has practical benefits for sports and wildlife photographers. Using teleconverters on Nikon’s 500mm 1.8 or 600mm will certainly extend the focal length, but with the loss of image quality and less-than-optimum autofocus functionality. It’s much better to design a lens with the correct optical configuration for its focal length, which is what Nikon did with the 800mm. It has 20 glass elements in 13 groups, two Extra-low Dispersion (ED) elements and Nikon’s proprietary Nano Crystal Coating. In addition, the Nikon 800mm is the company’s first super telephoto with fluorite elements, two, in fact. They reportedly boost the optical performance of a lens to an entirely new level; and fluorite weighs less than glass, which helps to reduce the weight of this lens. Want to see specs HERE on Amazon

As you might imagine, even with a couple of fluorite elements, this is still a beast of a lens, with dimensions of 6.3” x 18.2” (160mm x 461mm) and a weight of 10.1 lbs. (4.59kg). As a sports and wildlife image maker, the Nikon 800mm f/5.6 lens certainly needs its own monopod or tripod to record sharp, crisp photos. This lens is also built with Nikon’s Vibration Reduction (VR) technology (it would have been ridiculous without it!) allowing for shutter speeds 4 stops slower to compensate for lens movement, and extending its shooting range to include low-light conditions. The Nikon 800mm lens accepts 52mm filters.

The other major technological feature in this lens is an aperture diaphragm that is electromagnetically controlled, resulting in the “E” in its name. This is the type of control that is also found in tilt-and-shift lenses, such as Nikon’s PC-E models. With the positioning of these lenses throughout the tilt-and-shift range, the standard mechanical linkage simply won’t work. The same holds true for the 800mm, but for a different reason: the distance between the camera body and lens diaphragm is too great for mechanical linkage to provide the kind of precise control photographers using this lens require.

The only potential downside to this E control of the diaphragm is that the lens is only compatible with recent pro-grade Nikon DSLRs because it has no aperture ring; the D3, released during 2007, would be the oldest. In addition, Nikon’s current line of AF-S TC-nnE teleconverters can’t be used with this new lens because these older teleconverters control the aperture mechanically. Nikon was happy to resolve that issue by including its new TC800-1.25E ED teleconverter with every purchase of the 800mm lens. The teleconverter transforms the 800mm f/5.6 into 1,000mm f/7.1, and includes an ED glass element to retain more of the image and color quality that might otherwise be loss with teleconverters not designed specifically for this lens.

What may be most astounding about the Nikon AF-S 800mm f/5.6E FL ED VR lens (other than the price!) is a third party examination that produced almost a flat line during MTF tests. A true flat line would indicate that a lens is technically “perfect.” This new 800mm super telephoto from Nikon comes very close, which puts it in a class by itself…and the only lens to buy if the type of photography you shoot requires it.