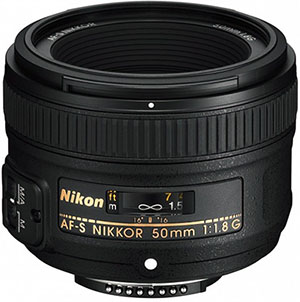 Many superlatives can be used to describe the Nikon 50mm f/1.8 G lens. It’s Nikon's latest AF-S interpretation of the classic 50mm f/1.8 lens. Then, it offers a number of Nikon firsts:

First Nikon 50mm 1.8 auto-focus lens that instantly overrides manual focus with a simple manipulation of the focus ring.
First to auto-focus on Nikon's cheapest DLSRs, such as the D3100 and D5100.
First Nikon optical design with seven instead of six spherical elements, plus one aspherical element.

Throughout the long history of Nikon 50mm lens development, photographers in the know have always been convinced that the inexpensive f/1.8 lenses were superior to the more costly f/1.4 and f/1.2 lenses. Those photographers with considerable experience with these lenses have relied on the f/1.8 because of its greater sharpness and lack of barrel distortion, which is often found in the faster lenses.

The complete name of this lens is the Nikon AF-S Nikkor 50mm f/1.8 G, which requires a bit of translation. Nikkor is the brand name of Nikon lenses. AF-S, or SWM, is an acronym for Silent Wave Auto-Focus Motor. G signifies a “gelding” of the lens (Yes, like a stallion). Nikon has deliberately narrowed the list of older cameras that are compatible with this lens to reduce the cost. The 50mm f/1.8 G has a 58mm filter thread, LC-58 snap-on front lens cap, LF-4 rear cap, HB-47 hood and CL-1013 bag.

The “gelding” of the lens is particularly important if you plan to use it with one of a number of recent and older Nikon camera bodies. It’s compatible with every Nikon digital cameras, both FX and DX, as well as the less-expensive digital cameras: D40, D40x, D60, D3000, D3100, D5000 and D5100. The incompatibilities of the 50mm f/1.8 G are evident when trying to pair the lens with various newer Nikon cameras and older film cameras.
Focus the lens manually and it works fine with the least-expensive, new AF 35mm cameras, such as the N55. Auto-focus won’t work; however, when you lose it, the in-finder focus confirmation dots in these cameras are helpful.
You will be able to focus the lens when shooting with older AF cameras, such as the N90s, N70 and F4. Program and shutter-priority modes will work, but since you can’t set the aperture on the camera or the lens, you’ll lose manual and aperture-priority.
The oldest AF cameras, such as the N2020, N6006 and N8008, will be compatible in manual focus and provide you with electronic focus indications, but there is no auto-focus and the exposure modes can become bewildered.
With no aperture ring, the Nikon 50mm f/1.8 G is essentially useless with manual-focus film cameras. Every shot you take will be at the minimum aperture.

For approximately $220, the Nikon 50mm f/1.8 AF-S G is an excellent value for a fast, single-focal-length lens. With a large maximum aperture, advanced optical system and quiet AF operation, plus, it’s compatibility with all Nikon DSLRs and Nikon AF cameras made since about 1990, most photographers will find it to be a superior normal lens.