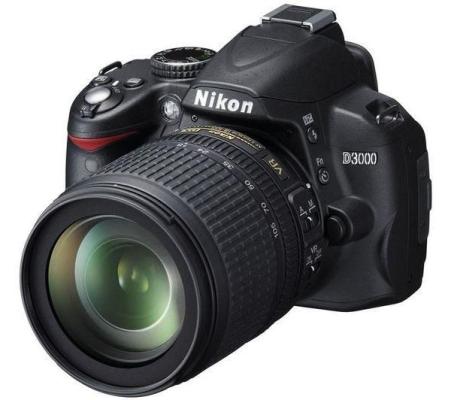 The Nikon D3000 is one of a number of cameras on the market for digital photographers who are ready to advance to their first DSLR. As the replacement for the earlier Nikon D60, the D3000 is not some feature-limited DSLR for beginners. It has a number of powerful features, especially in its set-up and shooting menus, that makes it very comparable to the Nikon D5000 and D90 cameras. Of particularly note is the D3000’s guide mode that explains key shooting criteria, instead of just displaying them, which was first seen in the Nikon D40. The other major improvement is the 11-point AF system compared to the D60’s 3-point system. If you are interested in buying camera with live view and HD recording then check out Nikon D3100 model.

Major negatives are the lack of live view and video modes, which are included on the D3000’s competitors, the Canon EOS 1000D and Olympus E-450. Many DSLR beginner photographers may not miss the D3000’s live view and video mode, but those are almost standard features on many newer DSLRs at various price points, so Nikon is taking a chance that this may become a much bigger competitive disadvantage.

In addition, the bundled 18–55mm kit lens retards the AF capabilities of the D3000, but kit lenses usually have some limits. Another is more colored fringing around the high-contrast edges of images. If you have older Nikon lenses, you’ll also discover that AF is unavailable with non AF-S optics. Although the accurate manual-focusing rangefinder indicator in the viewfinder is a positive, it doesn’t do much for you when trying to shoot a subject or object in motion.

Again, considering its entry-level branding, the D3000 offers above-average image quality. Artificial light challenges the white balance system, but the same can be said for the D5000 and D90; and this characteristic of the D3000 is comparable to its competitors. The D3000 does produce bright mid-tones, which can negatively affect highlight details in JPEGs, but tests reveal great-looking prints when generated directly from the camera.

At the common ISO range of 100–800, the image quality of the D3000 is outstanding. Its 10-million pixel CCD sensor is the same as the D60, but that sensor provides resolution beyond what you might expect. Higher ISO settings, such as 3200, can add an appropriate graininess to black and white images that gives you more creative opportunities.

As a first-time DSLR camera for many amateurs, the D3000 has all the speed and responsiveness they’ll ever need. Buffering and the speed images are displayed on the rear LCD do suffer from the use of Active D-Lighting. Turn it on in JPEG capture mode (and shoot in raw mode) and the buffer is limited to 6/7 frames, plus a review image needs approximately three seconds to be fully displayed. Switch the active D-Lighting to the off position and you’ll see that image within a half second.

The D3000 seems to perform well in challenging environments, such as a live music concert. It’s not surprising that AF accuracy is lower in poor light at the off-center points compared to the center point. In the low, rapidly changing light in Area AF mode, the camera was able to capture five or six excellent photos of the musicians throughout the AF array. The D3000 has this capability, in part, because of its 3D AF tracking mode. It links the camera’s AF and metering systems, so it’s easier to track subjects across the AF array using color, contrast and subject-to-camera distance.

Despite some drawbacks, the Nikon D3000 DSLR camera (at approximately $500 with the bundled lens) is an excellent first choice for digital photographers who want to advance their skills and results beyond what can be done with a compact, or point-and-shoot, camera.

Feel free to discuss your thoughts in our nikon photography forum