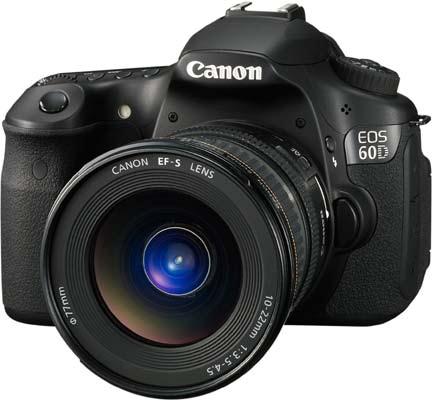 Digital photographers who are Canon DSLR camera lovers have faced a dilemma since the introduction of the EOS 7D. It has pro-quality features and capabilities, but costs significantly more than Canon’s 50D, which means only pros could justify an investment in the EOS 7D. Plus, the 50D doesn’t have the power of the 7D, and costs more than the Rebel T2i (EOS 550D), leaving the 50D and many of the other cameras in the X0D series as sort of a dead-end branch on the Canon family tree. To extend the symbolism, Canon has sprouted a new bud on that branch and it’s the Canon 60D.

Canon made a smart decision when it targeted the 60D at enthusiasts ready to upgrade from their Rebel instead of the semi-pro market. That means the 60D is sprouting from the other side of the branch from the symmetrical line-up of the 30D, 40D and 50D. The 60D’s difference is quite evident when you hold it in your hand. The body is now a plastic case and not the magnesium alloy construction of the 50D. Don’t let the lighter weight fool you, however.

The 60D includes features that you’ll find in a Rebel model as well as an EOS 7D, plus some that are exclusive. Unique features of note include an in-camera conversion function of raw files to JPEGs, which also allows you to fix various lens aberrations, such as distortion and chromatic aberration. You can also be more of an artist with the Canon 60D, when you utilize its creative filters after you’ve already shot images. The 60D also has greater sensor resolution at approximately 18MP and full-HD move capabilities

This places the 60D right where Canon wants it: between the Rebel T2i (EOS 550D) and the 7D. Another method to determine the value of the 60D is to compare it to the 50D. As mentioned above, the 60D is smaller and has a plastic body, but you shouldn’t think that means it’s simply an upgrade. Canon has purposely created a specific niche for it, as revealed by this comparison to the 50D:

The video capabilities of the EOS 60D are essentially the same as those found on the Rebel T2i (EOS 550D) and 7D, except for the 60D’s flip-out screen. That’s a significant difference, especially if you plan to shoot plenty of important video. Another video feature that the 60D has and the 7D doesn’t is manual control of audio recording volume. Although the built-in microphone only records in mono, you can attach a 3.5mm external mic, which then records stereo. The 60D’s video quality also matches the above-average to very good level of the 550D and 7D.

As with many DSLR cameras that have components and controls very similar to the immediate models above and below them, the Canon EOS 60D has nearly identical image quality and capabilities as the 550D/Rebel T2i and 7D. For many digital photographers in the enthusiast category, the ergonomic upgrades of the 60D (larger grip, better viewfinder and two-dial control system), compared to the 550D, may very well be important reasons to buy the 60D. Others may decide the swivel screen may tip the scale, or the less than $1,000 price tag (body only). Those that truly need the added features of the 7D have that alternative choice. That’s why it’s so critical to review carefully the specs and details of any DSLR camera that you consider purchasing. If you do your homework, then there are usually models that will make anyone happy.