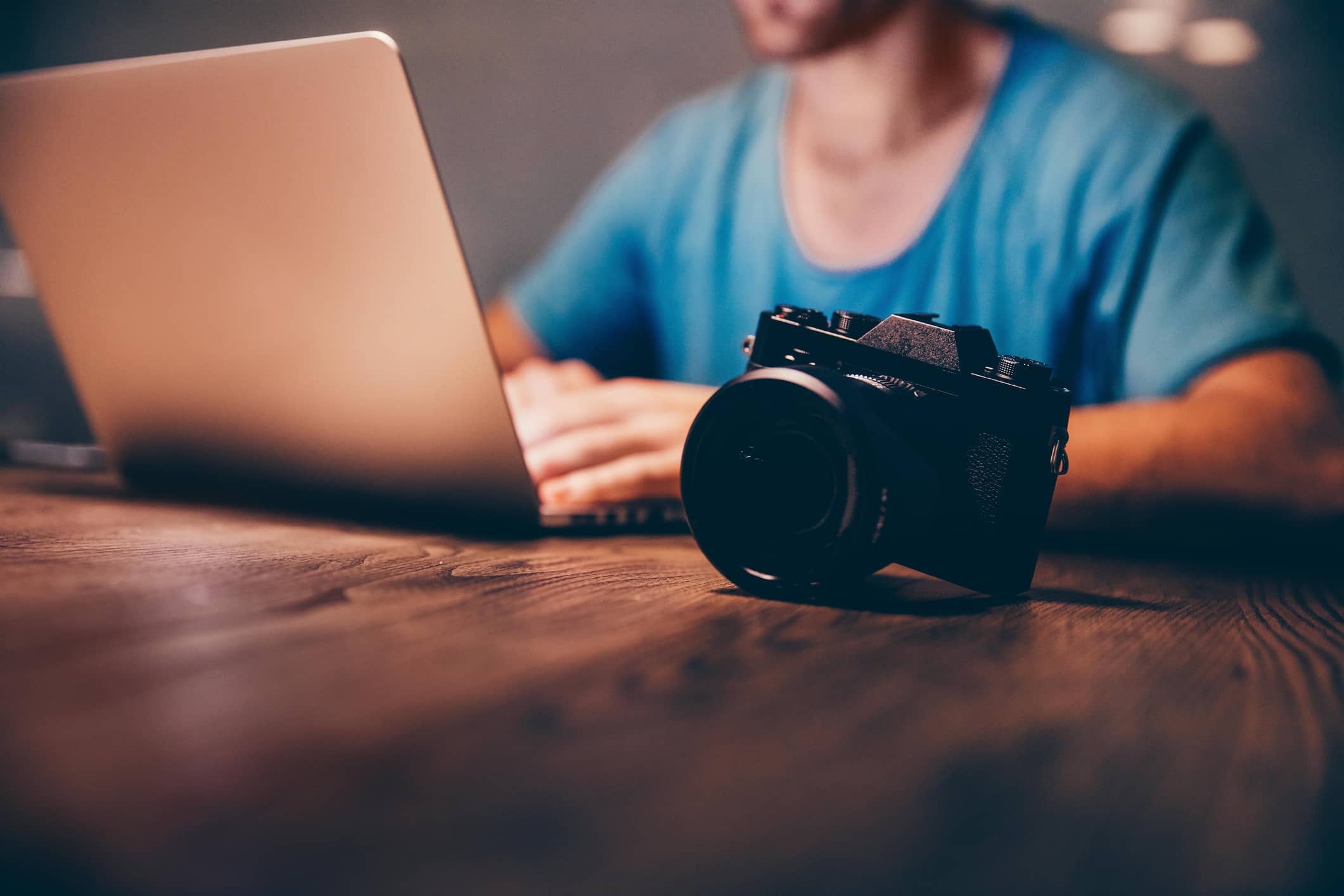 I don't have to tell you how popular Photoshop is with photographers...

But despite that popularity, there's always something new to learn with a seemingly endless array of awesome tips, tricks, and hacks coming out on a weekly basis.

Have a look at the video, and for a breakdown of each tip, read on below.

There's also some bonus Photoshop tips and tricks that you don't want to miss later on in the article! 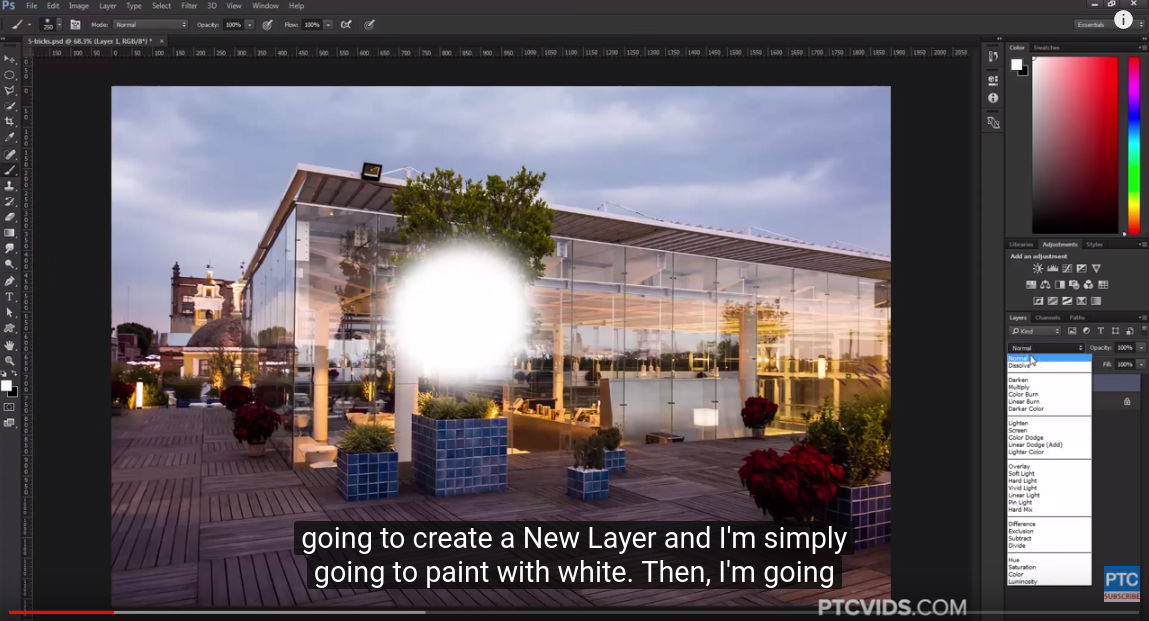 The first Photoshop trick you might not know is the advanced blending options in the Layer Style Panel and how it works with blend modes.

In Photoshop, select the Brush Tool, ensuring that white is the foreground color. Then create a new layer and paint an area of the image white as seen above.

Then, change the Blend Mode to Linear Dodge, but you'll see that there is no difference - the white area you painted remains white. 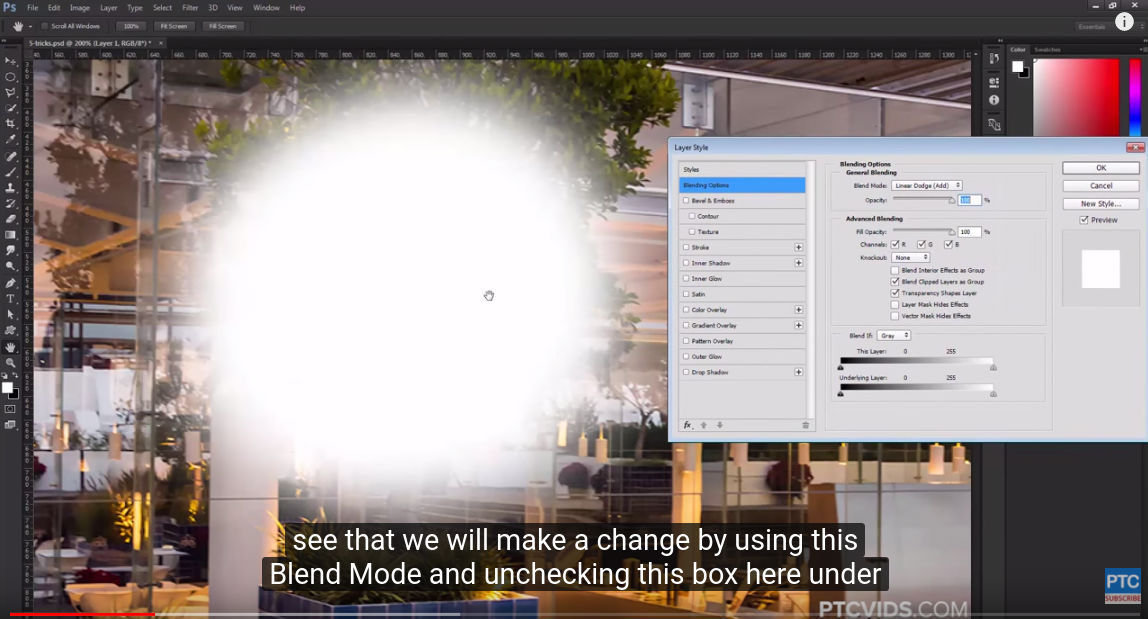 However, if you double-click on the side of the layer, it will bring up the Layer Style Window, as seen below.

In fact, it's a great look if you want to add highlights to things like metal or glass because it makes the pixels very hot, or bright. 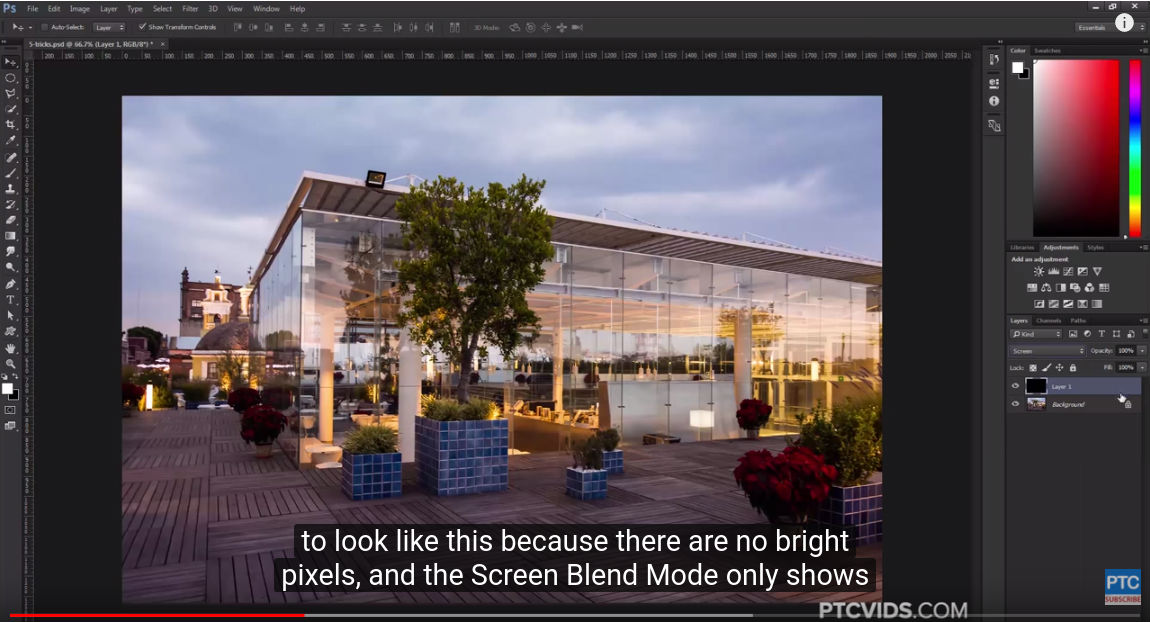 If you've never heard of the Precise Flare Tool, it's pretty self-explanatory: it allows you to precisely place a lens flare in an image.

First, create a new layer and fill it with black.

Then, in the Layers Panel, change the Blend Mode to Screen. The resulting image will look the same as the original. That's because the Screen Blend Mode only shows bright pixels, and since the layer is filled with black, there's no bright pixels to show.

Determine where you'd like the lens flare, and zoom in on that area.

Then go to Window > Info to bring up the Info panel, which shows the X and Y coordinates of the cursor.

Hover over the area in which you'd like to add the lens flare, then go to Filter > Render > Lens Flare. 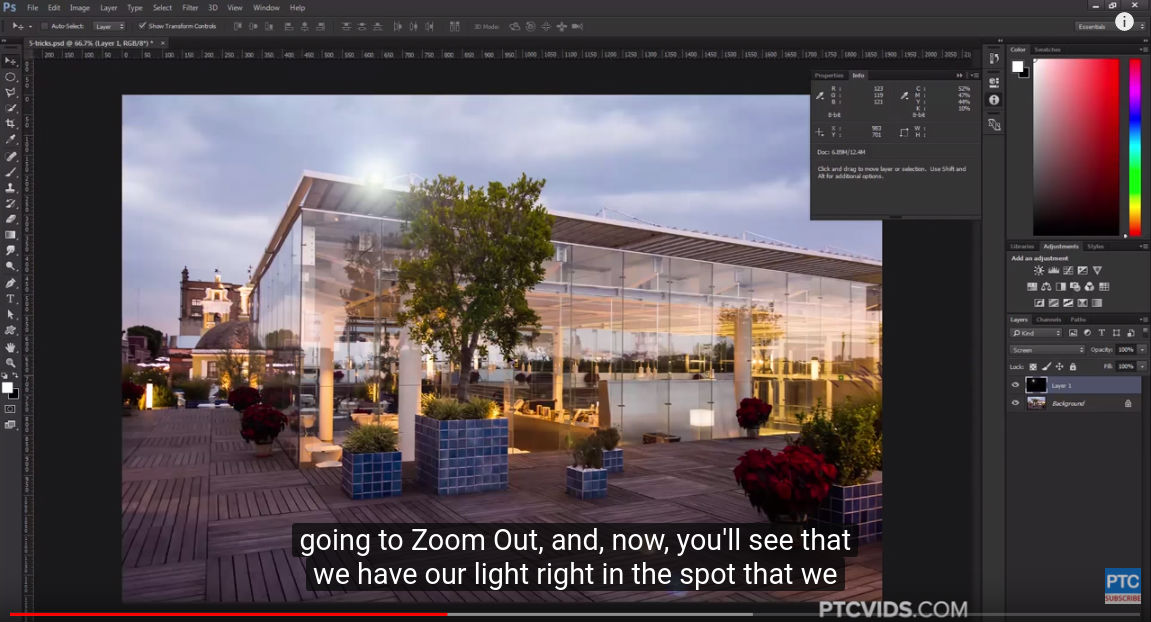 Press Alt/Option and Click to bring up the precise coordinates of the center of the lens flare. Then enter the coordinates where you'd like the flare to show up into the X and Y coordinates in the Info box. Press OK. You'll see that the lens flare shifts to your desired position.

You can adjust the brightness of the lens flare and the lens type, and then press OK.

Photoshop has another secret filter you can use to manipulate clouds.

The result is clouds with much more contrast than what you get if you just click Clouds from the menu. 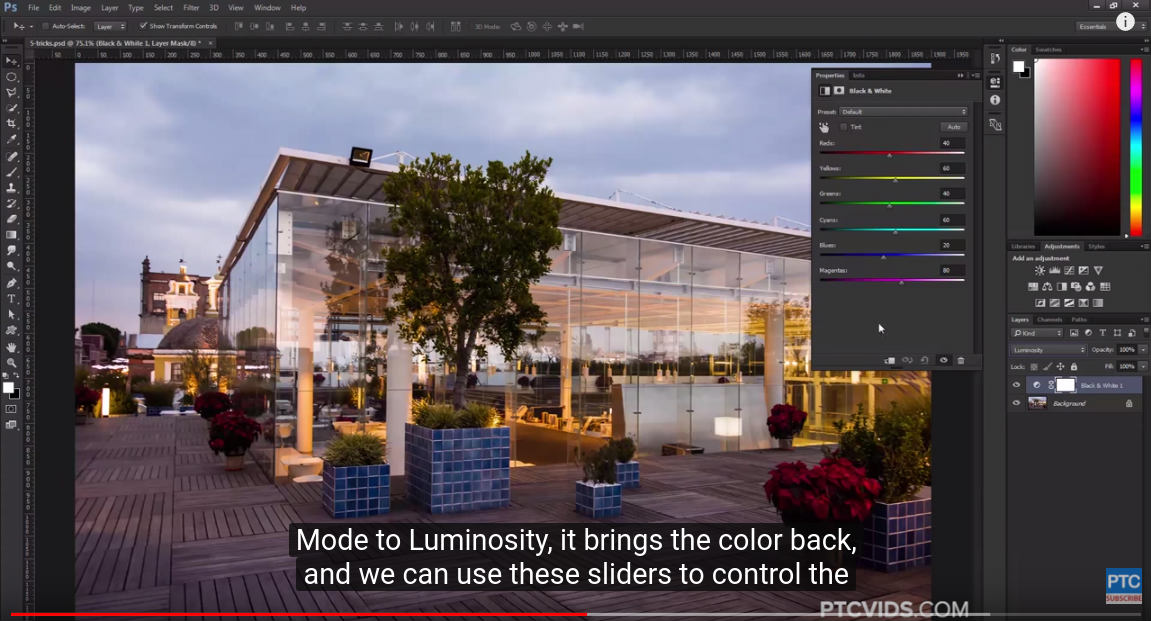 But Photoshop has some tricks up its sleeve that let you manipulate that layer in some cool ways.

So, create a new Black and White Adjustment Layer. Once you do, the image will turn black and white.

However, if you change the Blend Mode to Luminosity, you can use the sliders in the Black and White Adjustment Layer Panel (shown above) to manipulate the luminosity of individual colors in the shot. 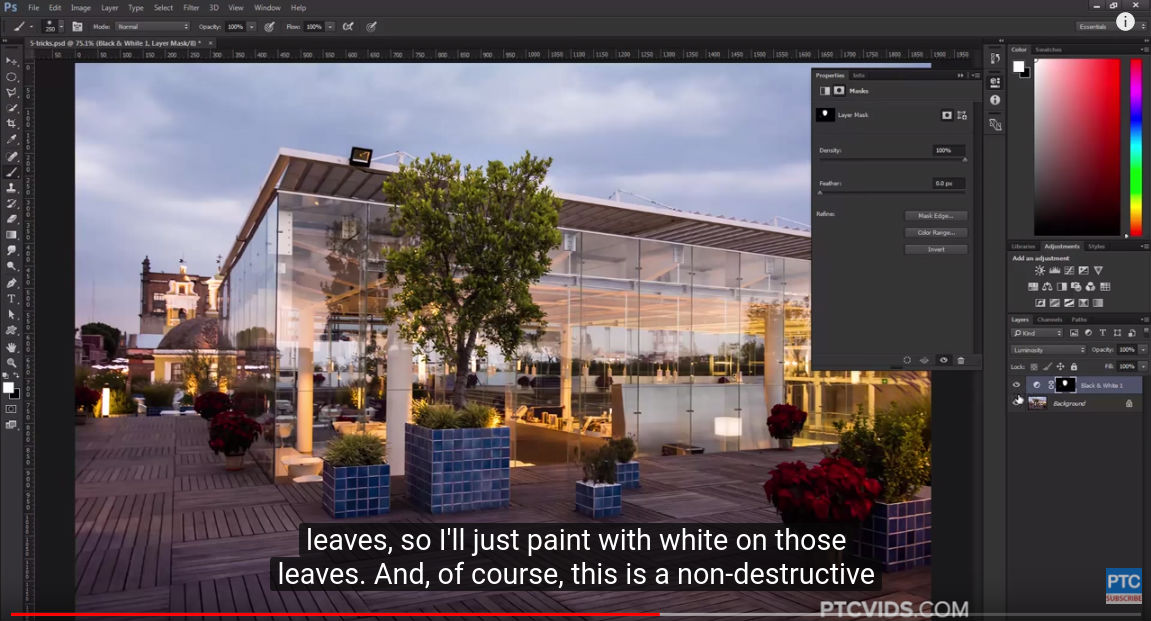 You can also use the Black and White Adjustment Layer with a Layer Mask to make similar adjustments to an image.

Click on Layer Mask, then press Ctrl/Command-Backspace to fill with the background color, which in this case is black.

Then, you can use a brush to paint with white on the image, which brightens that area, as seen on the tree in the screenshot above. 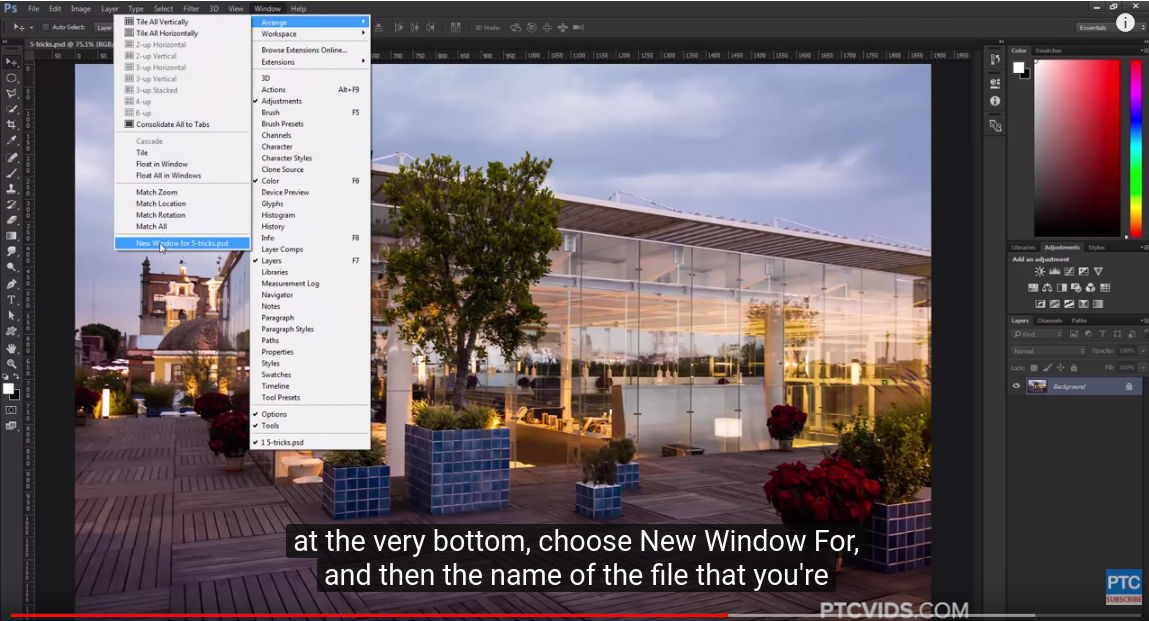 How often do you find yourself constantly zooming in and out on an image to work on a detailed area, then check your work in a more normal view?

Well, Photoshop has a secret that will allow you to do both at the same time by opening the same photo in two windows.

With the image open, go to Window > Arrange > New Window For, and that will open the image in a second window. 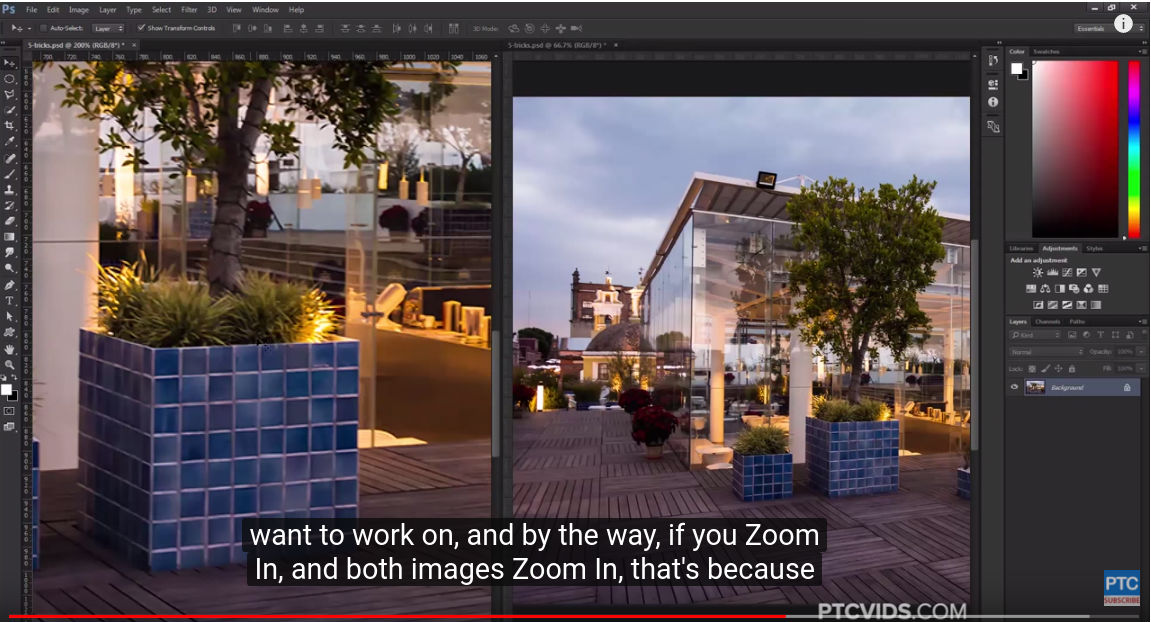 Then go back to Window > Arrange and select either Two Up Horizontal or Two Up Vertical. That will show both windows simultaneously.

Make sure that the Zoom All Windows box in the toolbar isn't checked, and that will allow you to zoom in on one window as shown above.

Then all changes you make on one window will show up in the other window as well!

Why stop at five Photoshop tricks when you can get 28 more?

Tutvid offers up all sorts of awesome tricks in the video above, which we broke down step-by-step in this article.

You'll learn how to do everything from whitening teeth to rotating the view, adding more undo steps to creating a filled layer mask, and filling text or shapes to adding VSCO or Instagram fade effects.

There's even tips on using hotkeys to change layer opacity, choose layers, move layers, see a before and after preview, and a Photoshop UI Easter egg as well.

Have a look at the video above, consult our detailed overview of each step, and get yourself a ton more insider information on Photoshop tips and tricks. 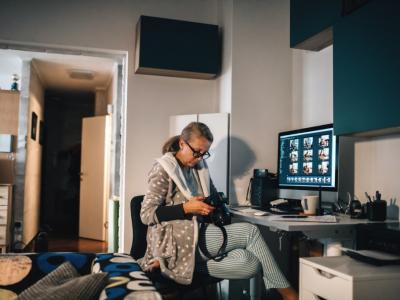 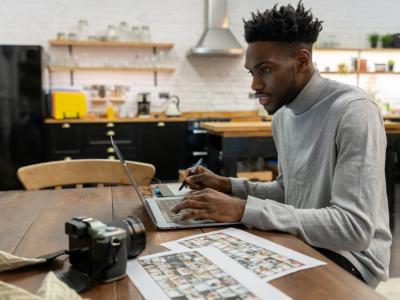 Use These Photoshop Hacks to Create ...