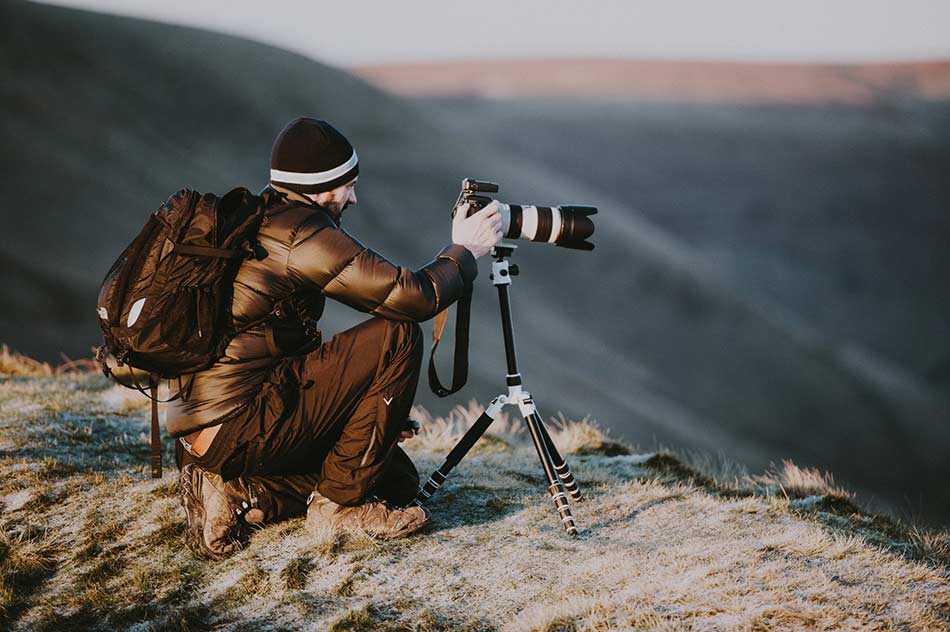 That’s because photography is incredibly complex. It has many facets and types. There are technical aspects to photography as well as creative ones. The manner in which photography is used is even different, often from one person to the next.

Moreover, there is an unlimited variety in the quality of photos. In that regard, trying to explain the difference between an ordinary snapshot and a work of art is a very difficult job. You can tell by looking at two photographs which one is which, but conveying how to get from being an amateur to a pro is not an easy task.

But, you have to start somewhere, so in this guide, I offer a few foundational ideas that will help you answer the question, “What is photography?” 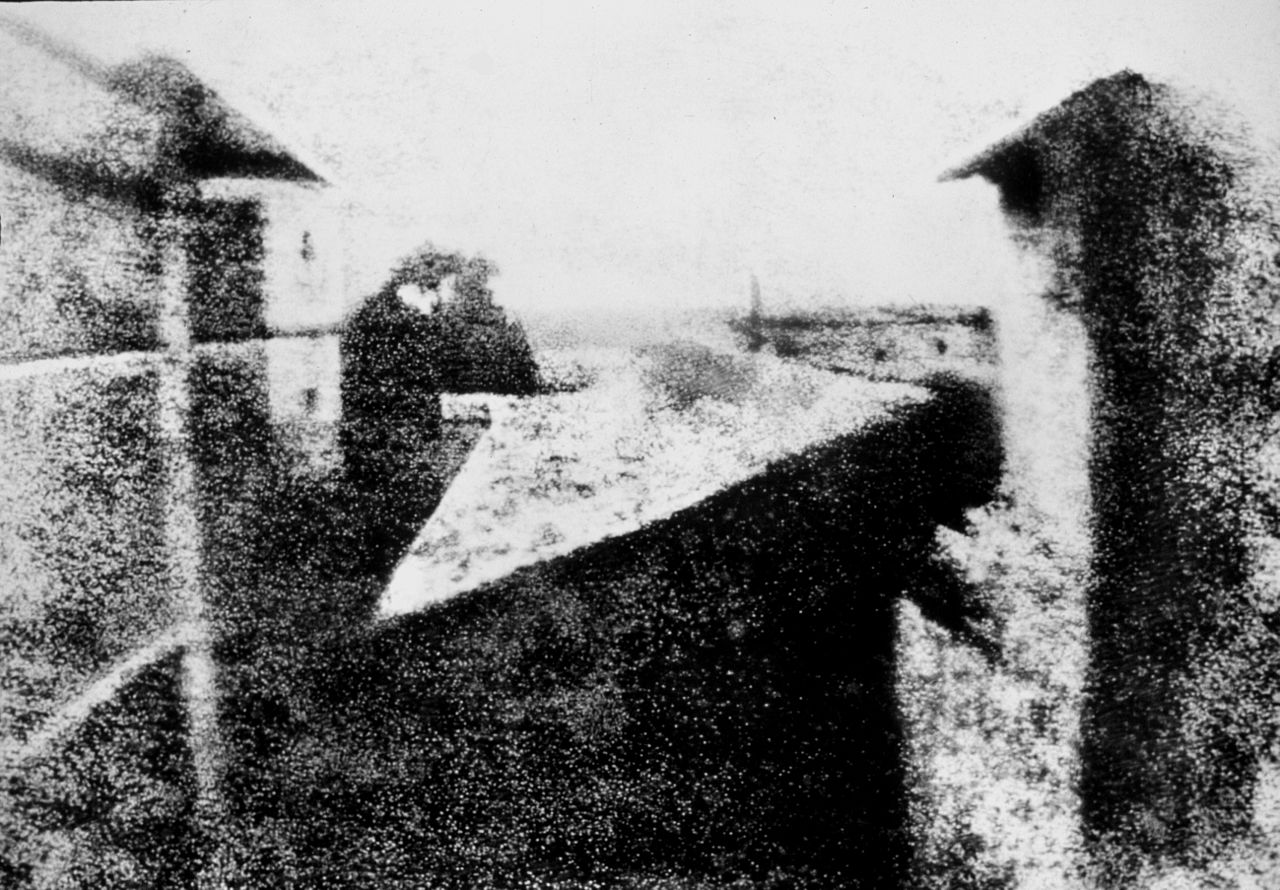 When trying to quantify what is photography, it’s important to first start with a photography definition.

In layman’s terms, photography is quite simply the process of capturing light with a camera to create an image.

This was done for the first time in 1826, when Joseph Nicéphore Niépce took a photo out of his window. The image, shown above, was entitled View from the Window at Le Gras.

In terms of subject matter, the photo isn’t all that impressive. However, as the oldest surviving photograph, it is nonetheless an important part of photography.

As simple as this image is, it demonstrates the technical process of photography perfectly.

To process the image captured by his camera, Niépce used a process of his invention called heliography.

It required bitumen to be dissolved in lavender oil. The resulting substance was coated onto a lithograph. Once dry, an engraving was placed on the lithograph, and then exposed to sunlight.

After setting, the lavender oil was washed off along with any unhardened bitumen. The remaining areas on the surface of the lithograph were washed with acid to create the final image.

But Joseph Nicéphore Niépce is just one player in the history of photography. There were many other photography achievements along the way.

A Brief Timeline of Photography 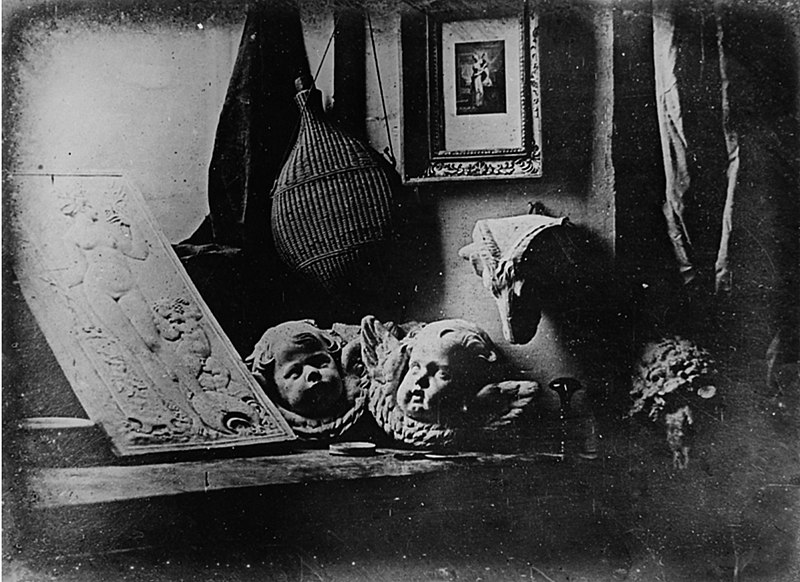 After Joseph Nicéphore Niépce successfully created the first permanent photograph, there were many other turning points in photography that got us to where we are today.

Invented in 1829 by Louis Daguerre, a French Painter, the Daguerreotype process was based off Daguerre's work with Niépce. Daguerre's process of photography shortened the very long exposure required for a heliograph and resulted in images that were much clearer. Above, you can see his photo L’Atelier de l'artiste, which was created in 1837. 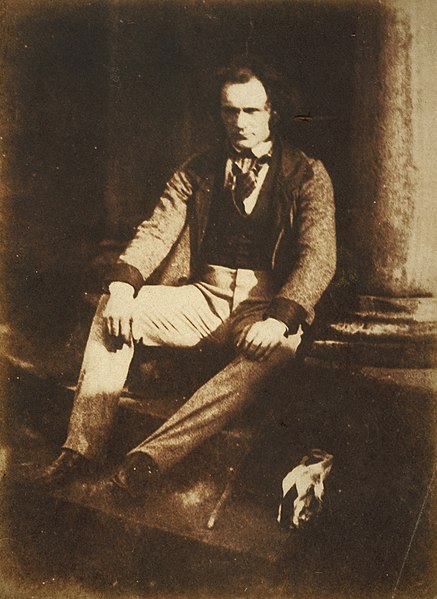 As astonishing as the image quality was of the Daguerreotype, just a few weeks after Daguerre announced his process, Fox Talbot, a scientist from Britain, revealed that he had developed an all-new way to create photos.

Instead of relying on metal plates as Daguerre and Niépce had done, Talbot used light-sensitive paper. His method, called the calotype process, was made public in 1841.

Above is one of the oldest known calotypes, a portrait of Thomas Duncan circa 1844. 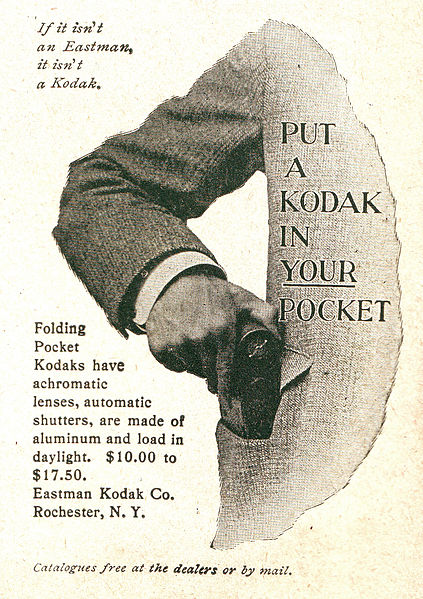 In 1888, George Eastman and his business partner, Henry A. Strong, debuted roll film for the first time.

This Eastman Kodak film was transparent cellulose that came in 70mm format. The rolls were then cut down the middle (by Thomas Edison, no less) to create what became the standard film size of 35mm.

These small, easy-to-use rolls of film revolutionized photography and made it something anyone could pursue.

The advertisement above is from 1900, and shows how roll film made cameras so small they could fit in a pocket. 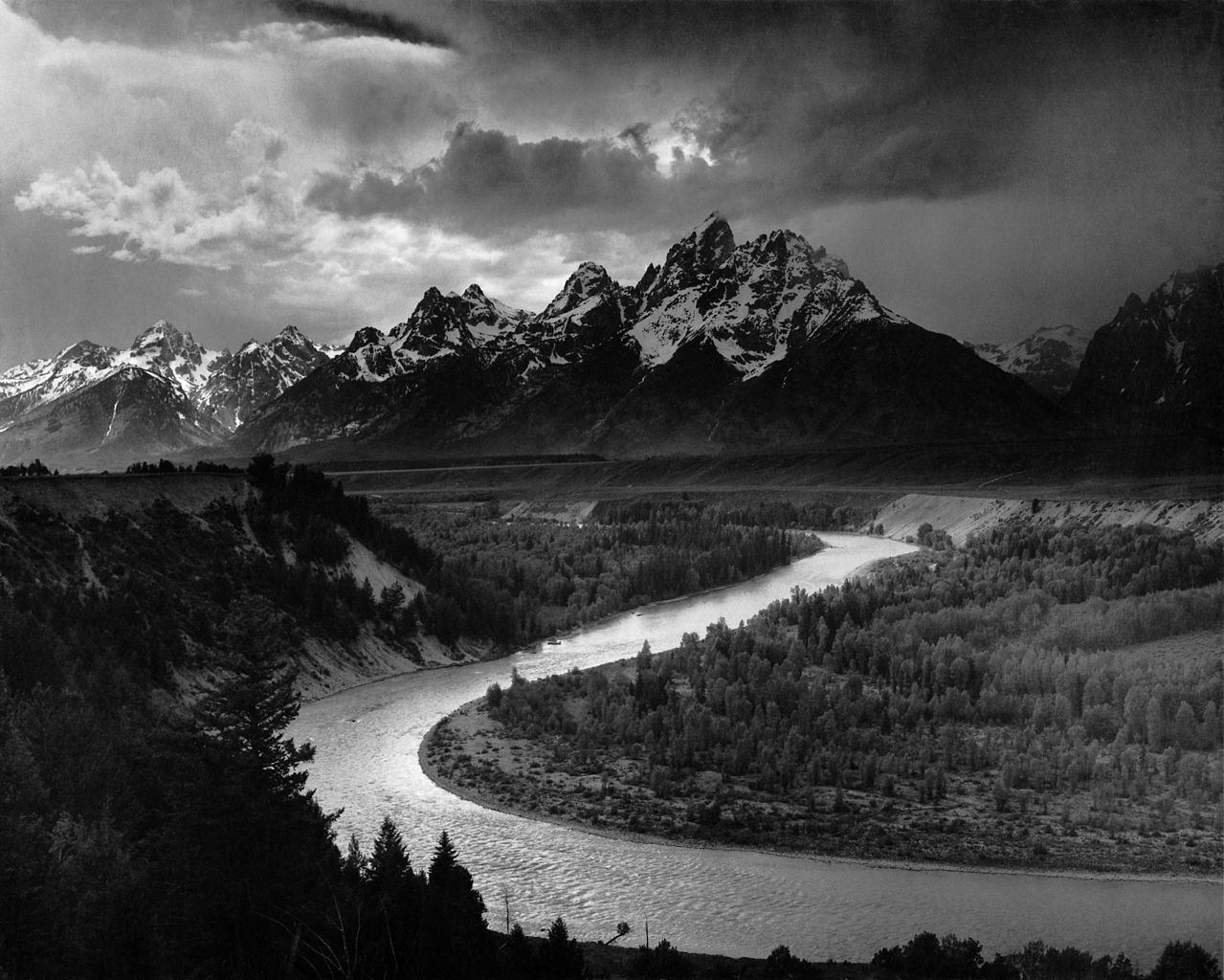 It would be impossible to list all the photographers over the years that have had a hand in making photography a worldwide pursuit of millions.

In fact, it's darn near impossible to whittle down a list of the most famous photographers to fewer than several dozen.

In our examination of the most famous photographers of all time, we identified more than two dozen photographers whose impact on photography has been immeasurable. In addition to Louis Daguerre and Joseph Nicéphore Niépce, that list includes: 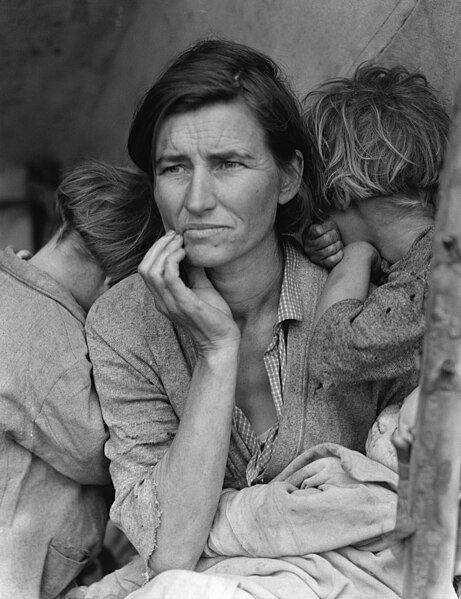 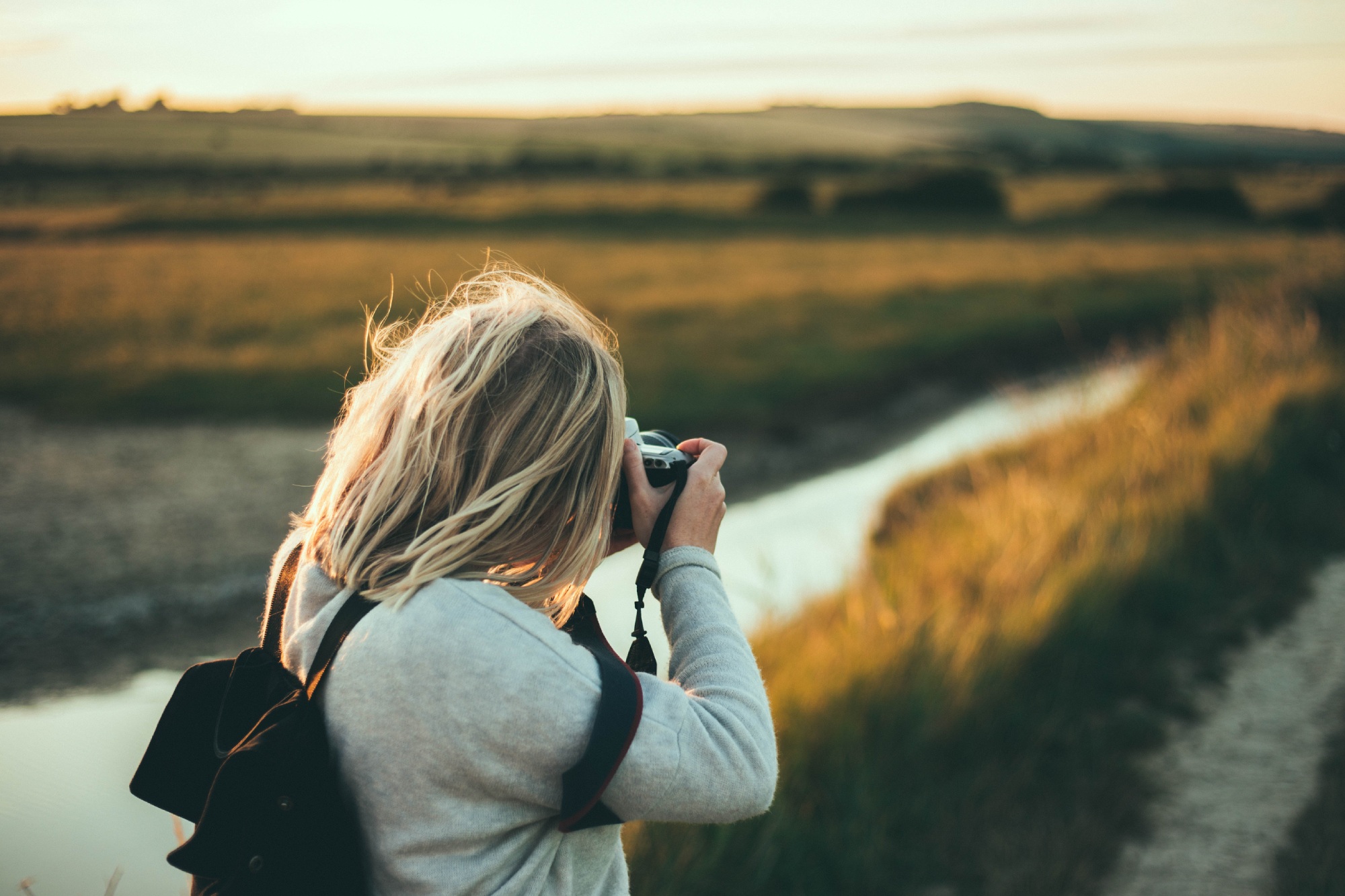 Photo by Joseph Pearson on Unsplash

Back in the day of Louis Daguerre, you'd need a laundry list of gear to create a single image.

Today, though, we're lucky to be living in the golden age of photography in which we have very powerful and effective cameras attached to our phones.

With the development of digital photography, and in particular, mobile photography, the list of recommended camera gear one needs to get started has really been reduced to one thing - your smartphone. 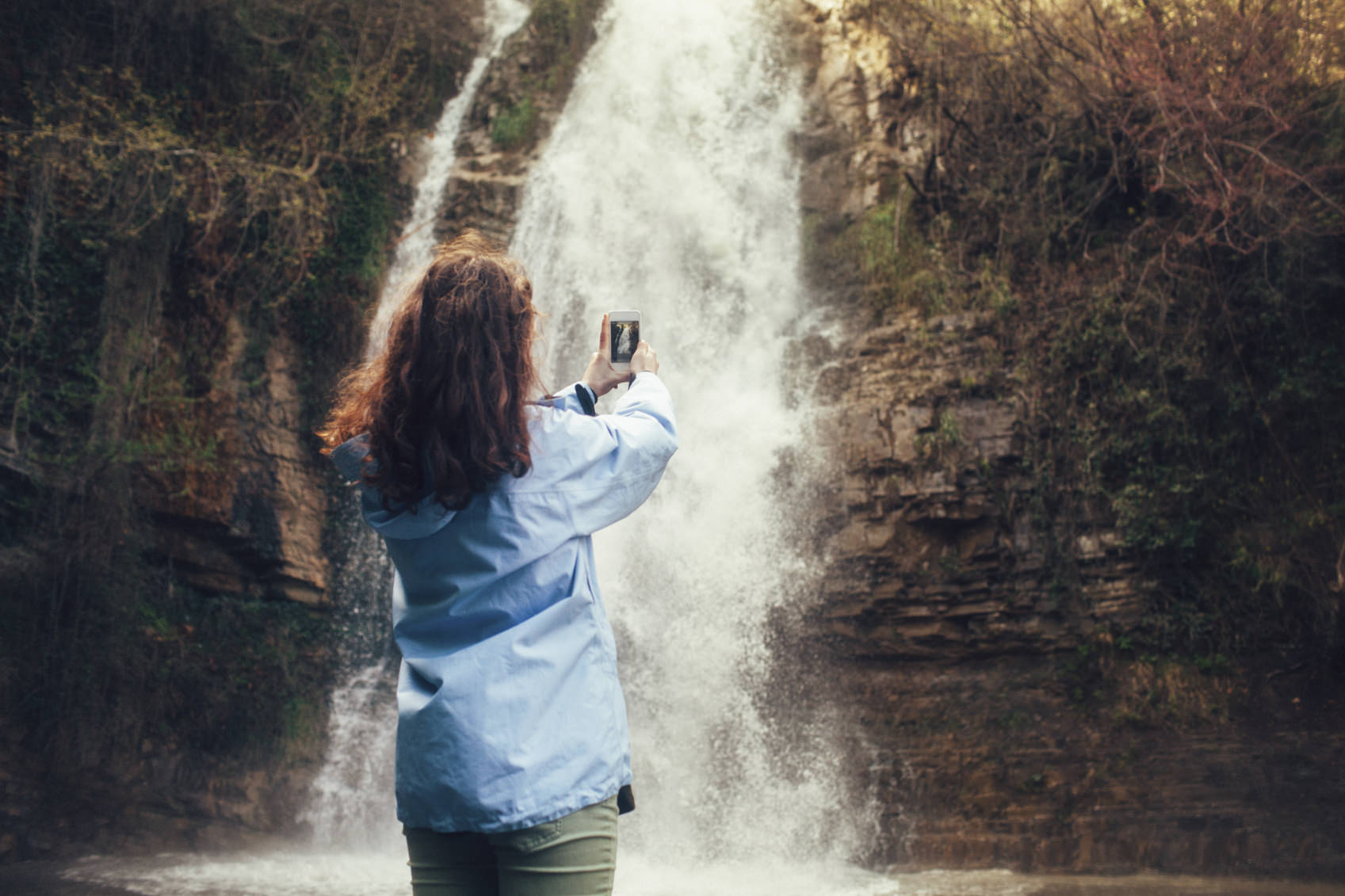 After all, smartphone cameras are easy to use, always with you, and are seamlessly integrated with other parts of your life like texting, email, and social media, so you can easily share the photos you create. Heck, you can even edit your photos right on your phone.

But as good as smartphone cameras and lenses and apps have become, there might be a point at which you need to upgrade. 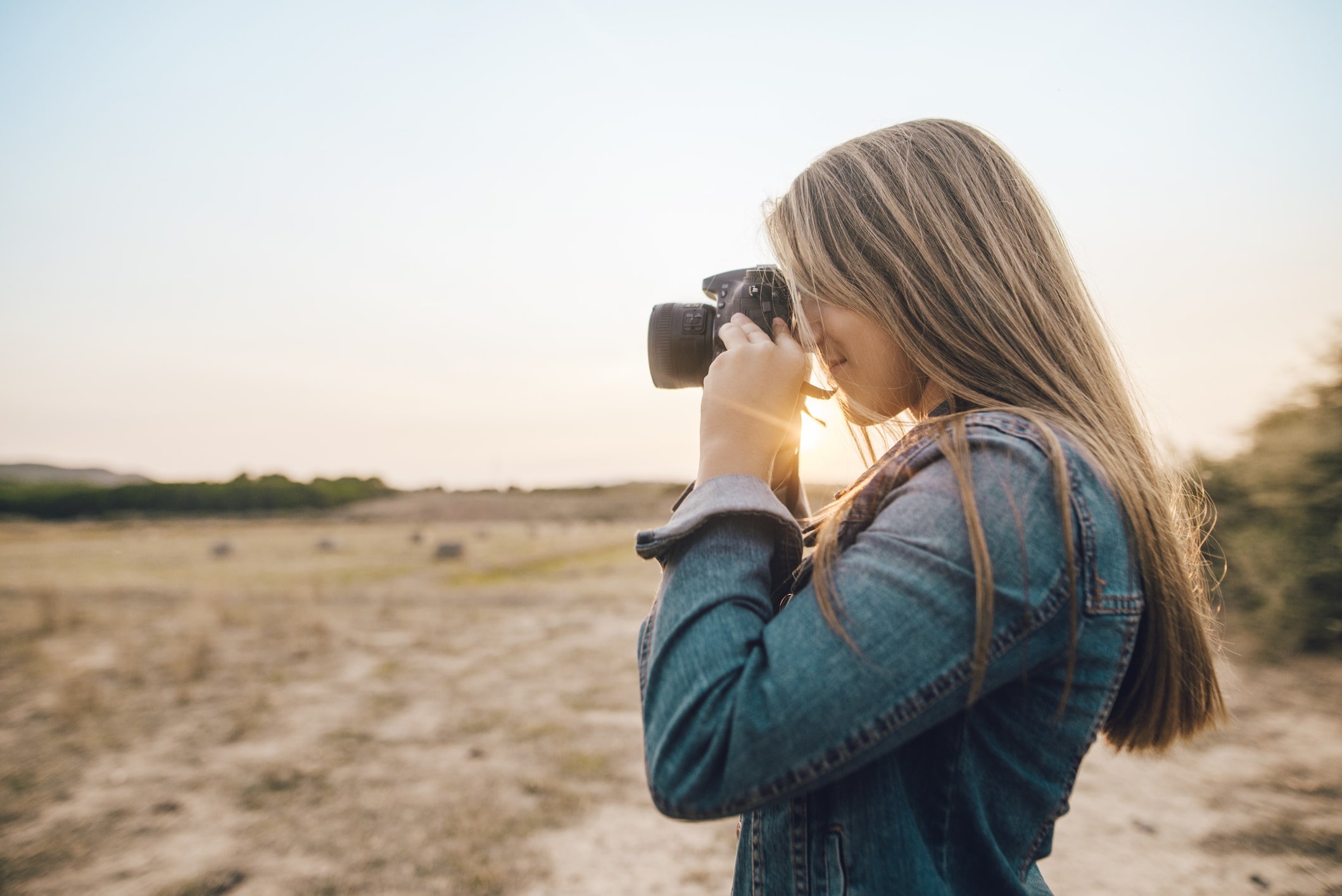 For example, your smartphone isn't all that capable of photographing sports, wildlife, action portraits, or in low light conditions. 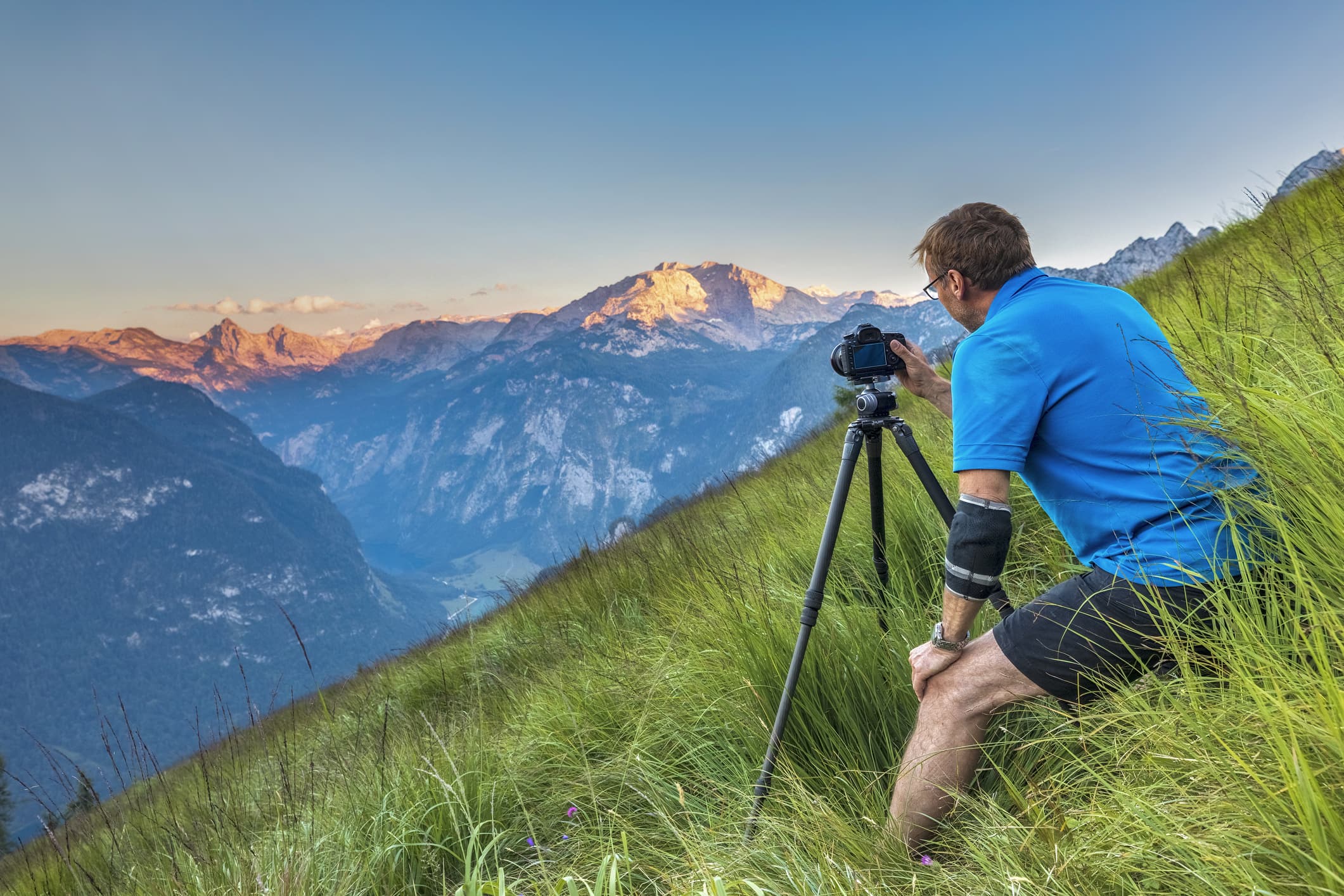 Of course, it would be nice to have more than just a camera and a lens. In fact, if you want to create the very best photos, consider adding the following to your kit: 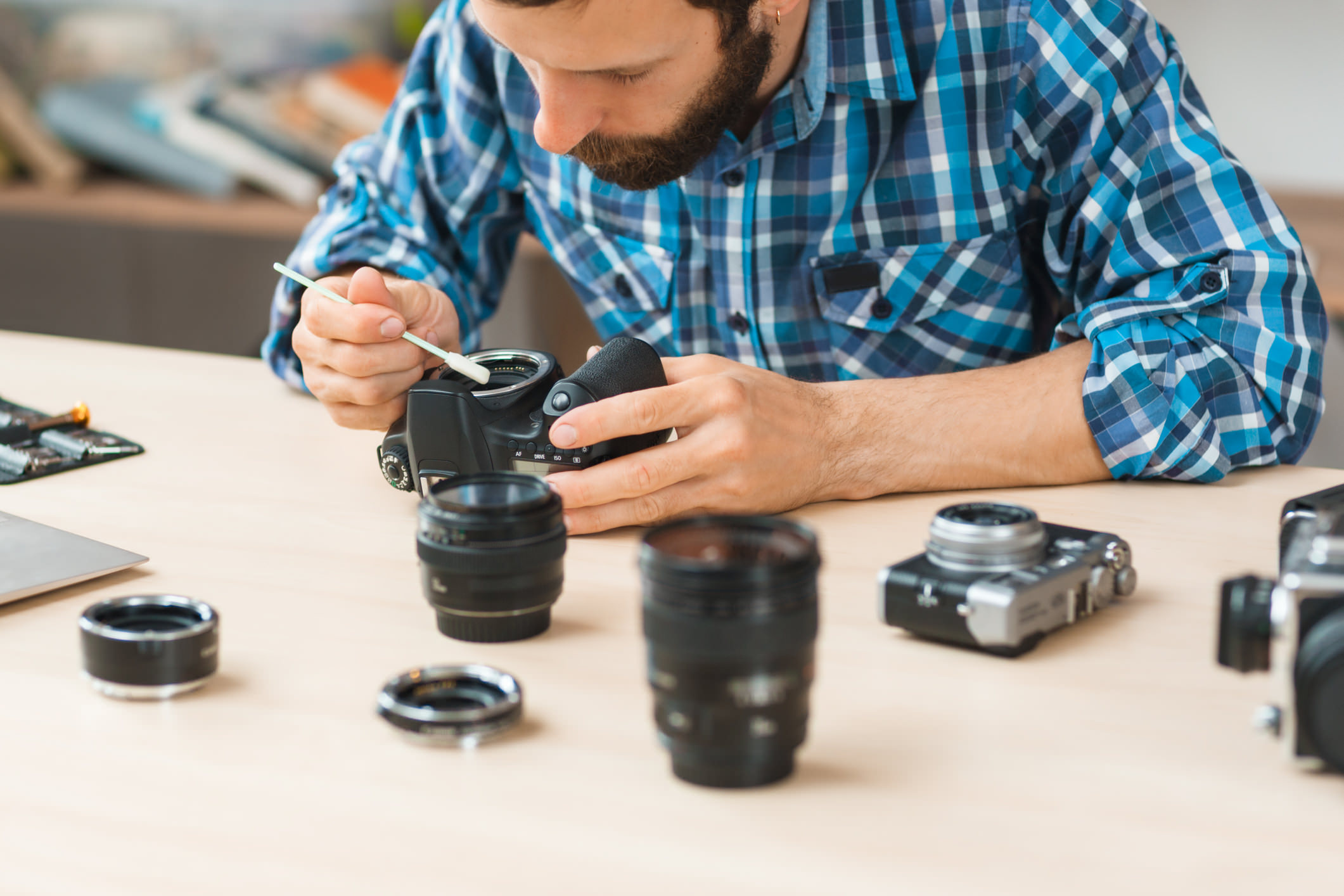 Additionally, there's a few more things you need to get started in photography. You'll want to pick up a fast memory card, spare batteries for your camera, and a cleaning kit so you can keep your camera and lenses clean.

As you learn more about photography, develop your aesthetic, and determine the type of photography you're most interested in pursuing, you can start to accumulate more specific gear.

The Basics of Photography 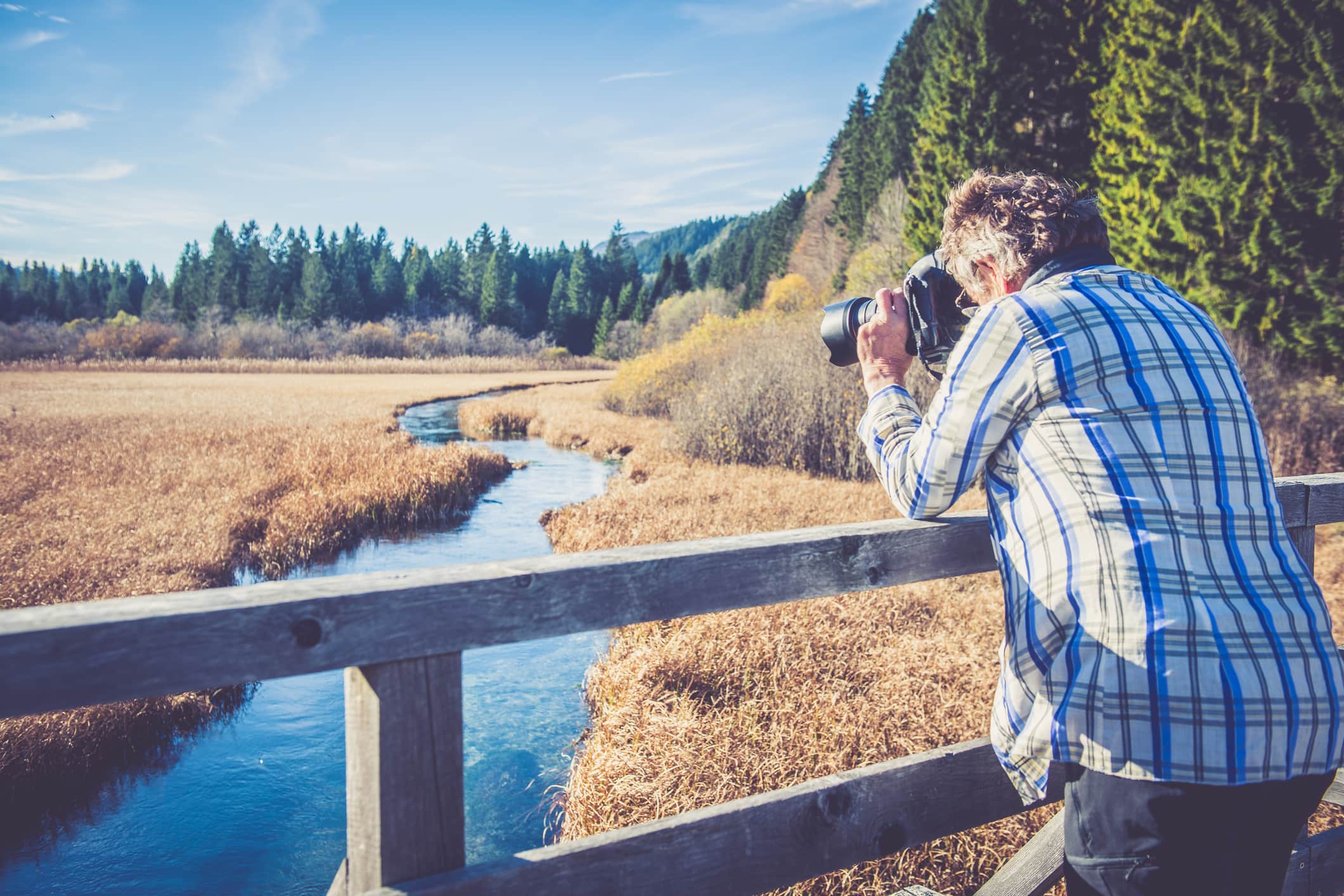 For all you beginner photographers out there, photography is built on light, and as such, you have to learn how to control it.

There are three camera settings that comprise the very basics of photography, and that each independently control light in a different way. Yet, these three settings are used together to create an exposure.

Sure, you can shoot in full auto mode and let the camera determine the exposure. In many cases, it works okay. But we're here to learn, right? So, here's a quick overview of the exposure triangle - aperture, shutter speed, and ISO.

Granted, there are many, many other aspects of photography definition that you'll need to learn in order to maximize your potential behind the lens.

But if you begin by developing an understanding of aperture, shutter speed, and ISO, you'll be in good shape to build a solid foundation of understanding upon which you can continue to learn more about photography. 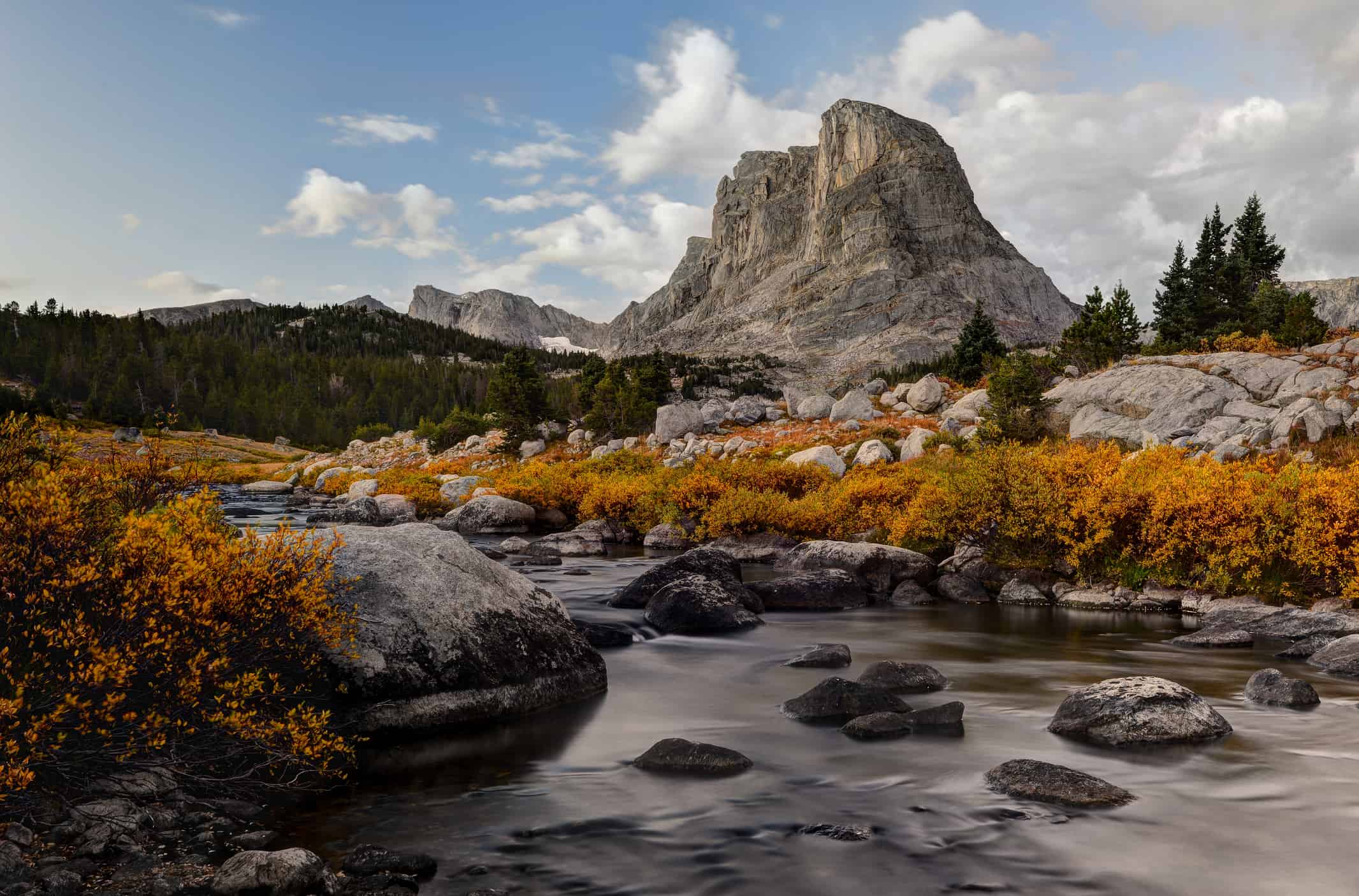 You can learn about the most popular types of photography in our detailed guide, but for our purposes in this article, here's a quick run-down of some of the possibilities you can try: 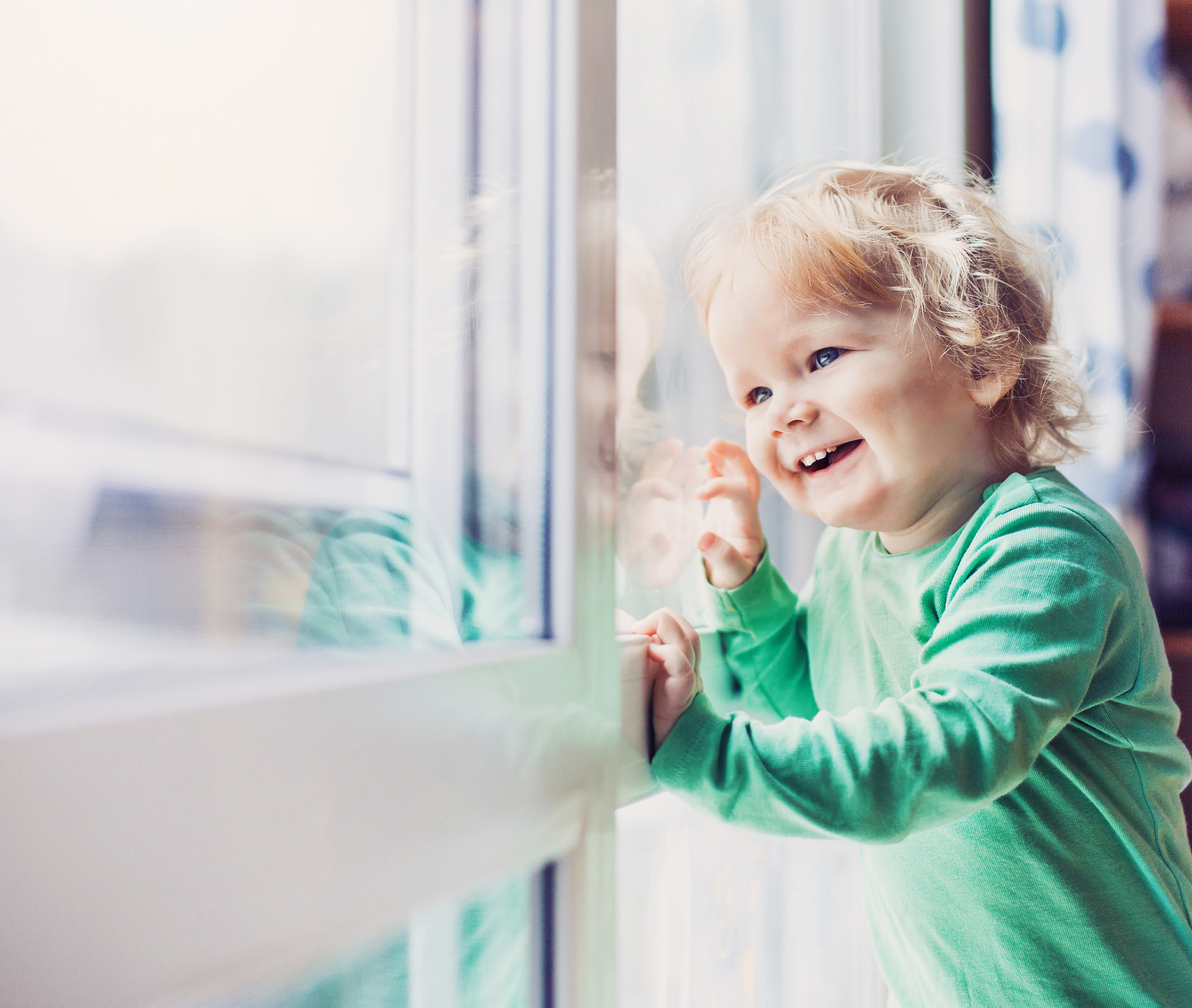 Again, this isn't a complete list of the types of photography, but it'll get you started. And as you explore and learn more about photography, you'll likely find that the answer to our original question - What is photography? - is much deeper and broader than we've covered here.

More than the technical and artistic elements that comprise it, photography is about feelings, emotions, and making connections with people and places. 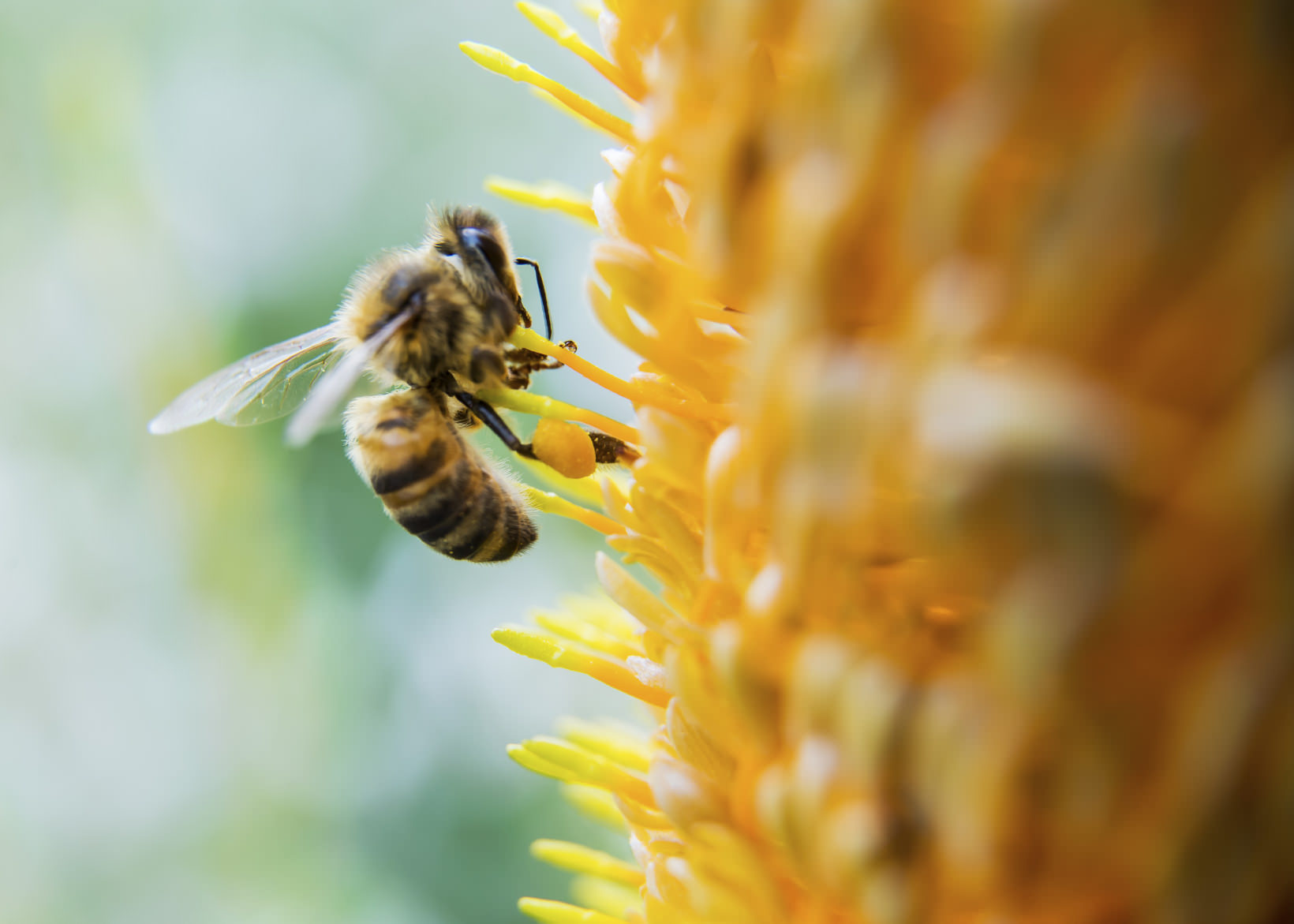 So, what is photography? It's an incredibly personal experience, that's what!

What photography is to me is probably very similar to what it is for you, but at the end of the day, our own experiences, opinions, biases, beliefs, and so forth influence what photography means. That's part of what makes photography so great; it can bring us together thanks to the power of the lens, yet at the same time, we can enjoy it as a highly personal experience.

How awesome is that?!