A Beginner’s Guide to Photographing Stars With (or Without) Trails 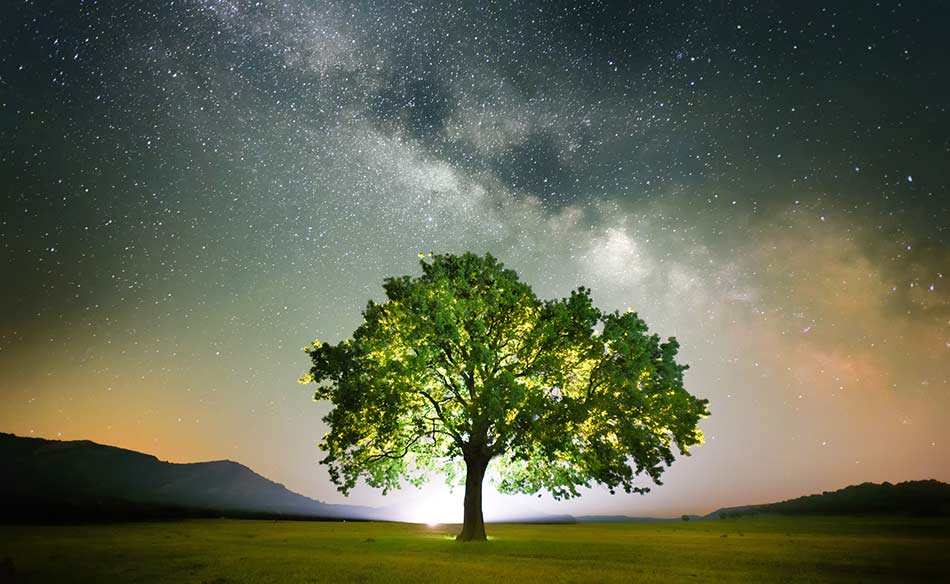 How to take pictures of stars?

When you're just starting out in photography, it's easy to get yourself stuck in a rut doing things that become comfortable and familiar.

This can apply to many different things, from composition to the perspective from which you take your photos to the kinds of photos you take.

That also applies to the time of day you shoot, which, for most of us, is during the daytime.

Particularly for beginners, daytime photography is the easiest, simply because there's less worry about fiddling with exposure settings to get a well-lit photo.

But that doesn't mean that you can't or shouldn't expand your horizons into nighttime photography of the sky.

Though there is a common opinion that astrophotography is hard to do, that couldn't be further from the truth.

Let's explore two basic types of photos of the night sky: images with star trails and images without. 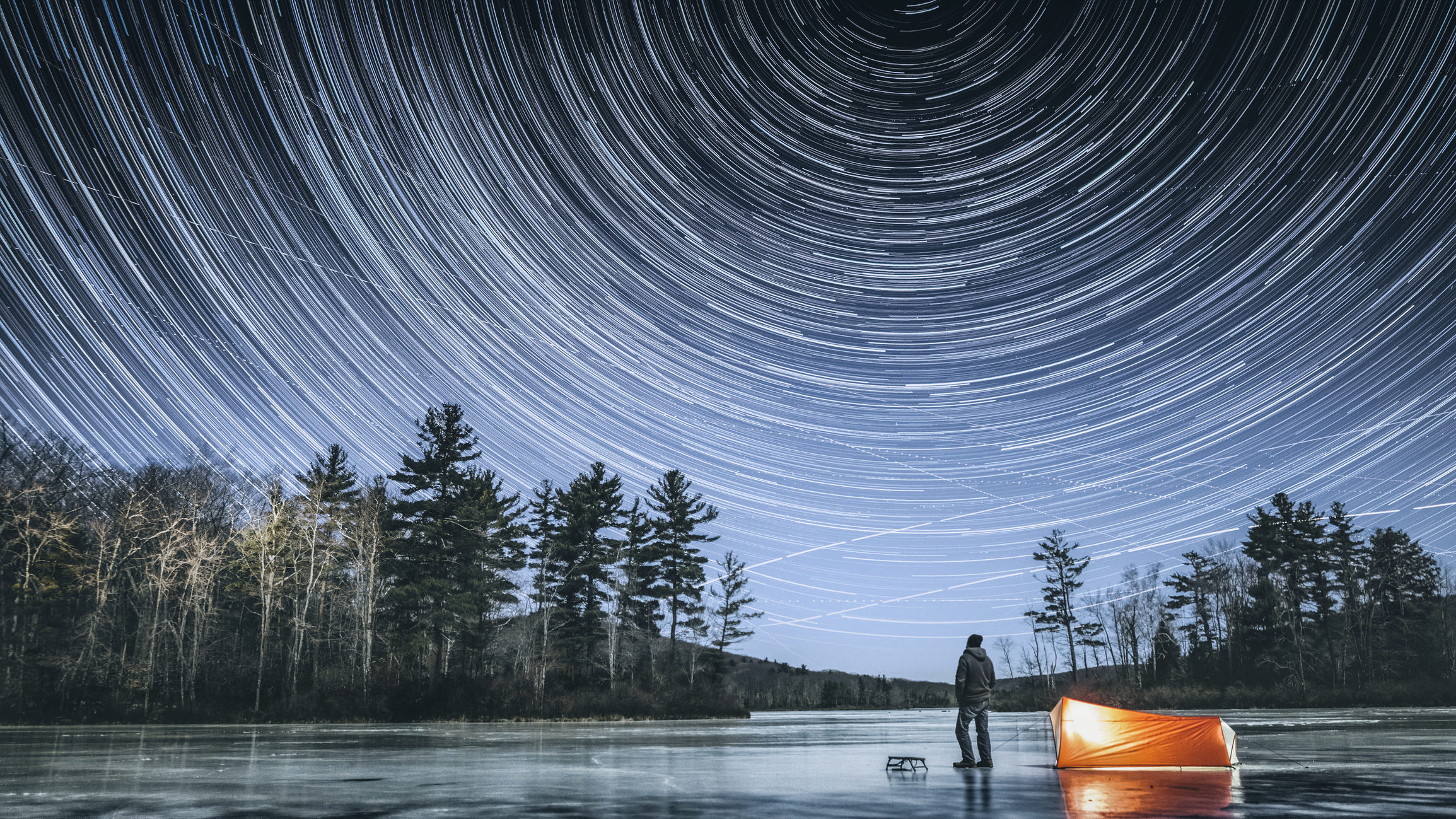 Star trails like those in the image above form for two reasons.

To revisit basic science concepts, the earth rotates on its axis once a day, making the stars, moon, and other celestial bodies appear as though they are moving across the sky as the night wears on.

Second, because there is so little light for a camera to collect in the dead of night, a long exposure is required. However, using a long exposure helps accentuate the motion of the earth, resulting in the star trails you see above.

When shooting star trails, you're simply ignoring the movement of the earth.

And the best part is that you can take photos with star trails with your regular DSLR or mirrorless camera, a remote shutter release, and a tripod. That's it! 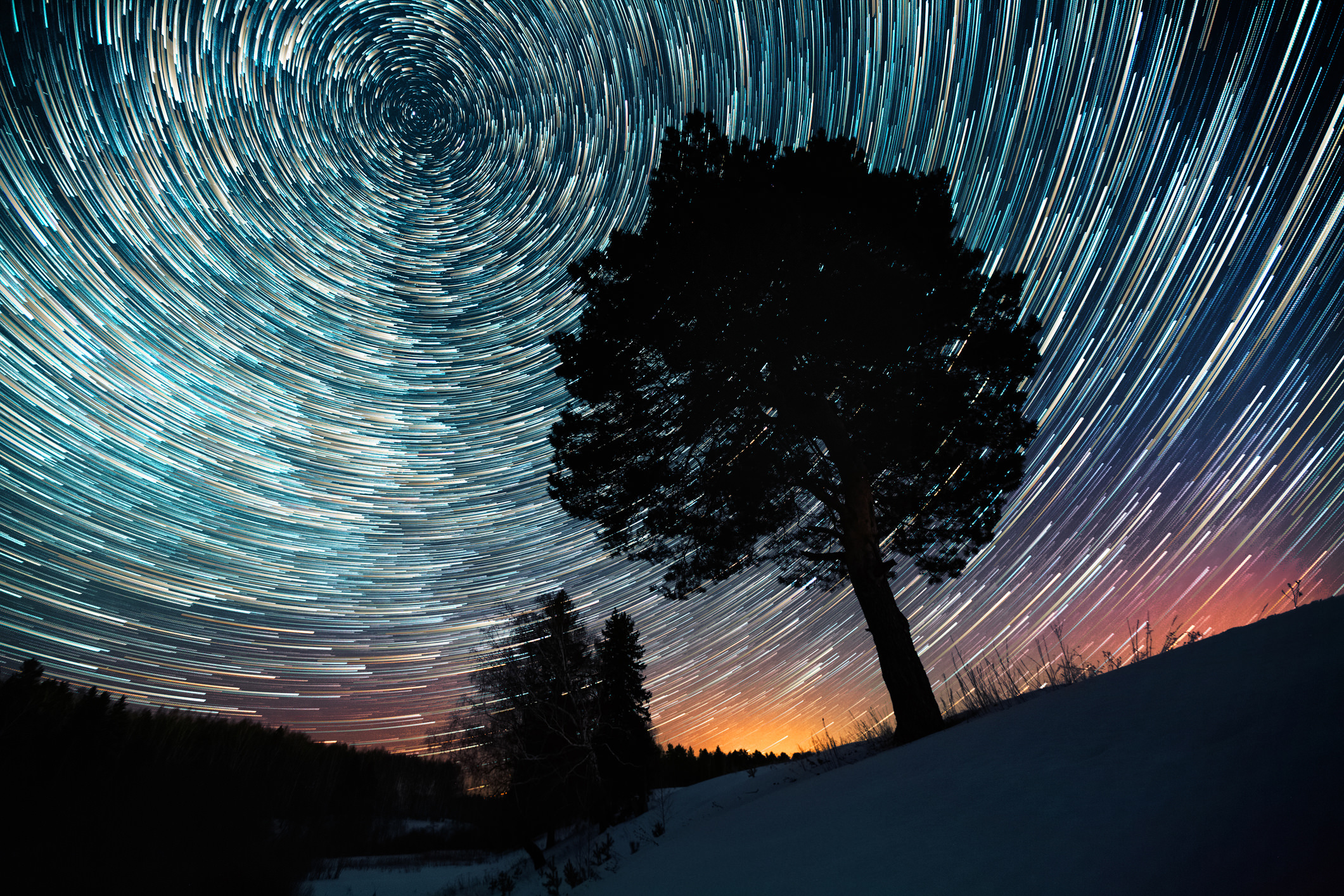 Since you're ignoring the movement of the earth, all you have to do is mount your camera to a fixed tripod, hook up your remote shutter release, and compose the shot. Because your camera will be in a fixed position, the rotation of the earth will work its magic and star trails will be the result.

Granted, it's not quite that simple, so check our guide for astrophotography camera settings and our other guide for composing shots of the night sky for some in-depth tips.

Anyway, to collect enough light for a good image, you have to venture into the world of long exposure photography.

Though that might sound scary, it really isn't. It's just a matter of using Bulb Mode on your camera.

Usually, cameras only have a maximum shutter speed of around 30 seconds. Since you need an exposure that could be an hour long or more, you have to be able to select a much longer exposure time. Bulb mode allows you to do that.

Star Photography - Setting Up the Shot 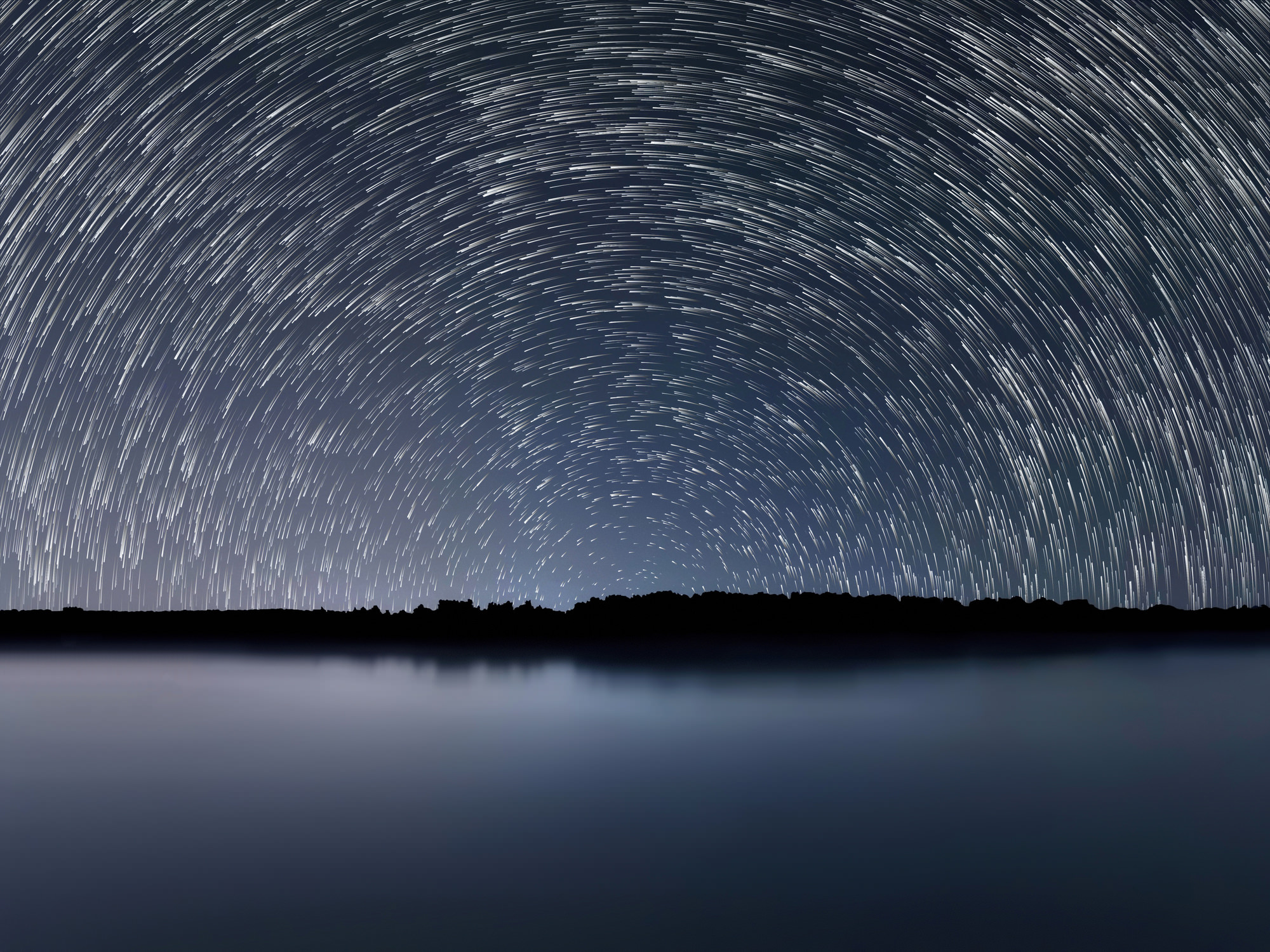 Follow these quick and easy steps to maximize your ability to get high-quality star trail images:

Granted, the length of time the shutter is open is going to depend on a variety of factors, not the least of which is how much light is present.

If you're in the country away from lights, you can extend the shutter speed without worry of overexposed areas. Conversely, if you can't escape the city lights, a shorter shutter speed might be needed.

Get more in-depth instruction on shooting star trails in the tutorial video below by Tony and Chelsea Northrup:

Another option for nighttime photos of the sky is to get clear, sharp, and crisp stars, like those seen above.

This is a little more complicated because unlike images in which there are star trails, you can't just ignore the movement of the earth.

Instead, you have to compensate for the earth's rotation such that no star trails form.

Breaking Down the Shot 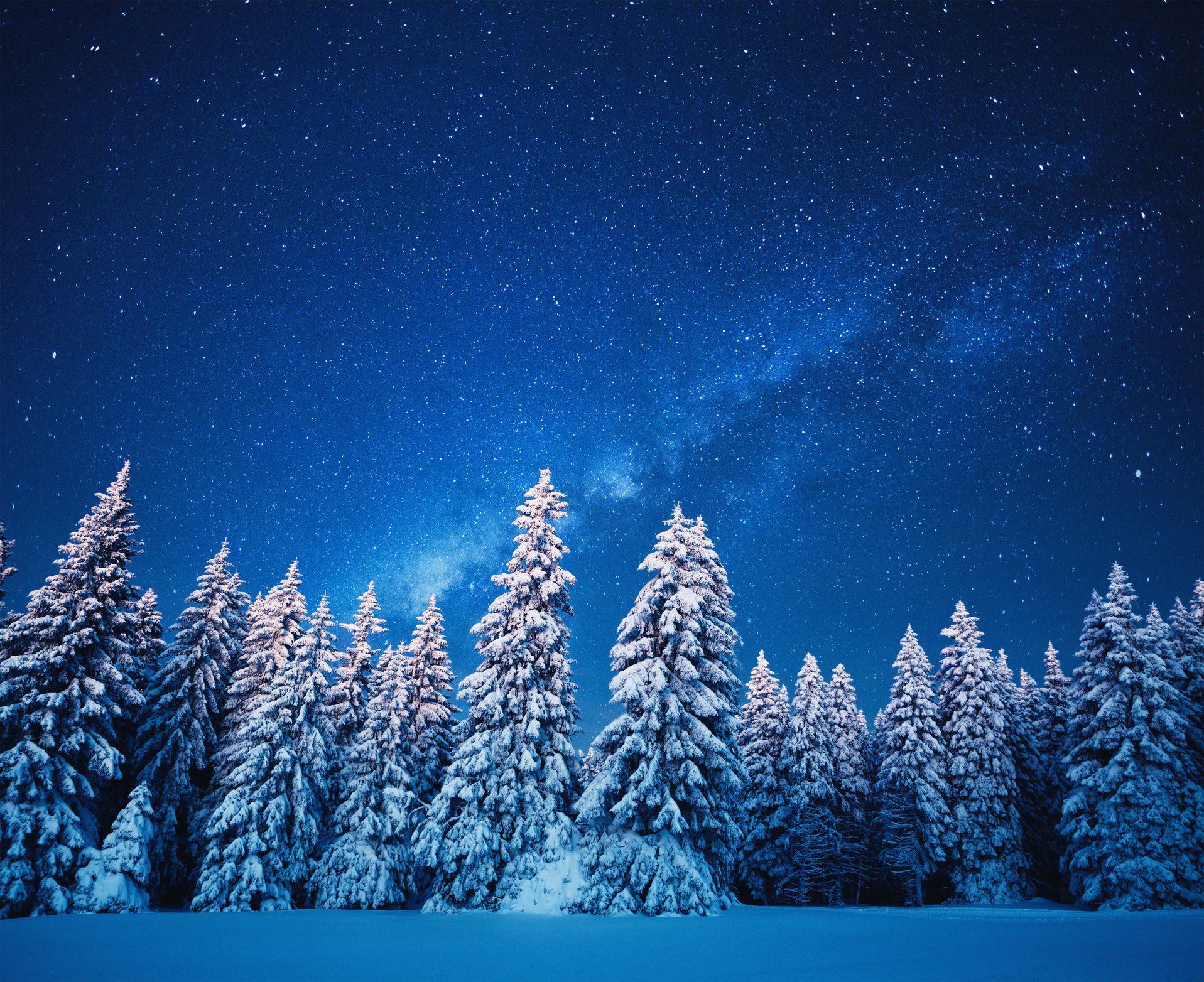 Just like with star trail images, you may well need to use Bulb Mode to get an exposure that's long enough to result in a well-exposed image.

However, since the earth rotates at a rate of about one-half a degree per minute, you have to be mindful of just how long you leave the shutter open.

For example, if you leave the shutter open for one minute, the earth will have rotated just a half a degree.

As another example, if you leave the shutter open for 30 seconds, the earth will rotate about one-fourth of a degree. Again, the star trails that result from such a short exposure will not be visible in the image unless you zoom in and inspect the stars.

Setting Up the Shot 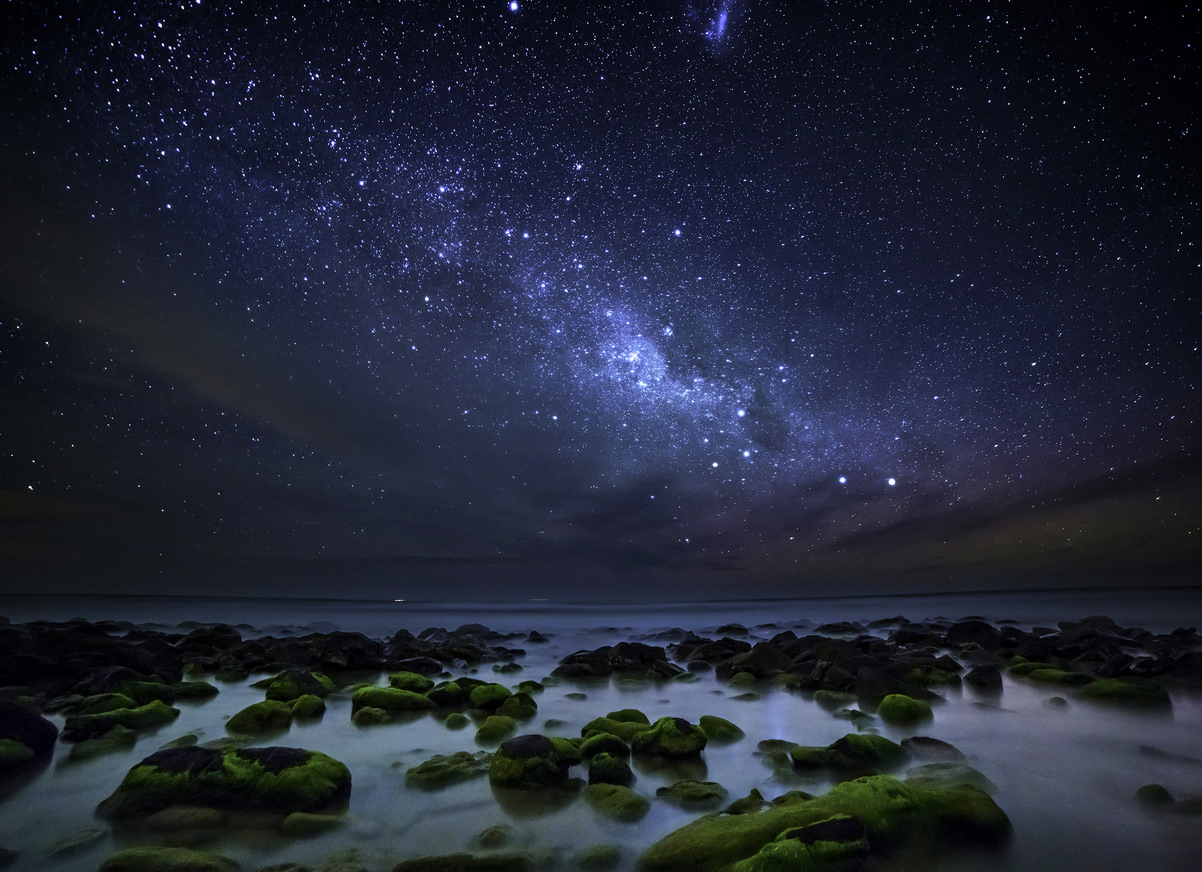 Follow these steps to get images with pinpoint stars:

Additionally, images with no star trails benefit from using an ultra-wide-angle lens. The wider the lens, the longer you can leave the shutter open without getting visible star trails.

Get even more tips for shooting pinpoint stars (with foreground interest too!) in the video below from AdoramaTV:

Using the steps outlined above will give you a solid basis for creating your first photos of the night sky.

It's important to remember, however, that regardless of whether you shoot photos with or without star trails, astrophotography takes plenty of practice and patience to master.

The name of the game here is to take the basic steps outlined above, and then practice taking photos of the night sky.

You might well find that your first image (or first several images) aren't perfect. If that's the case, don't get discouraged!

If your images are too dark, adjust the exposure settings to brighten them up.

If your images are blurry, work to stabilize your camera and tripod to prevent camera shake.

With time, you'll gain a better understanding of things like camera settings, exposure, and composition, and your photos of the night sky will improve as a result.

But, you have to start somewhere, so why not start with star trails and pinpoint stars?!