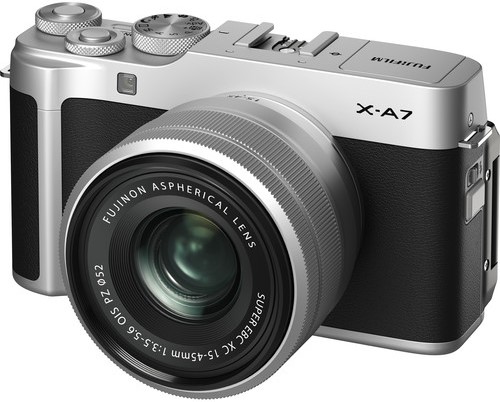 I strongly believe that the Fujifilm X-A7 is the best entry-level mirrorless camera. In fact, I believe it so strongly that I wrote a whole article about it, which you can read here.

So, why do I think that the Fujifilm X-A7 is the best entry-level mirrorless camera? Let me count the ways.

The Fujifilm X-A7 is sleek, but comfortable, it is capable, but not confusing, it is good for video and for still photography, and it is designed for use in just about every scenario most photographers will find themselves in.

Plus, the Fujifilm X-A7 just so happens to be a Fujifilm, which means it has that classic look and feel everyone is after nowadays. You will essentially never be disappointed while opening anything from Fujifilm, and the Fujifilm X-A7 is no different.

Of course, no camera is perfect and the Fujifilm X-A7 does have its faults. In order to figure out what those are and whether this camera might work for you, read the rest of this Fujifilm X-A7 review. 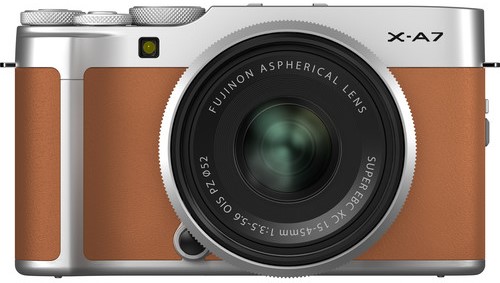 I mentioned the fact that the Fujifilm X-A7 is really capable. But you can’t really see how capable until you read the full Fujifilm X-A7 specs.

For starters, this camera features a 24.5MP sensor, which is more than enough for any entry-level photographer. The ISO range is also quite respectable at 200-12,8000, which means you’ll be able to take good shots (even if you’re not sure what you’re doing with lighting yet).

The Fujifilm X-A7 features 4K video capabilities, as well. This is going to be an especially great spec for photographers who aren’t sure whether they want to specialize in videography or stills yet, because you have the option to play around with both.

But, my favorite spec on the Fujifilm X-A7 is its screen. It’s a bit larger than most mirrorless screens are at 3.5”. It is also fully articulating, which is good for vloggers, and a touchscreen, which is good for just about everyone. 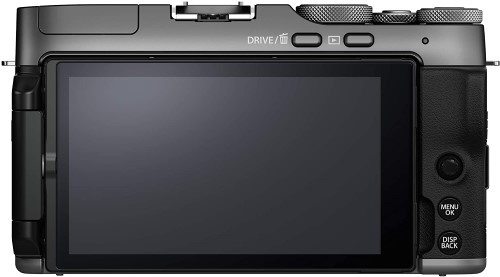 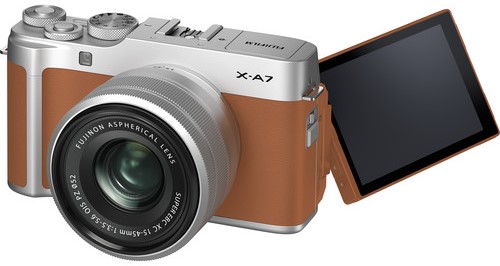 I absolutely love the Fujifilm X-A7 design, but it’s no secret that I’ve always been a fan of the aesthetics of Fujifilm cameras.

You can purchase it in a black, mint, dark silver, brown edition. I’m definitely a fan of the black.

The camera is small, but sleek. The grip is unlike anything any of the other camera manufacturers would create because it is quite boxy. 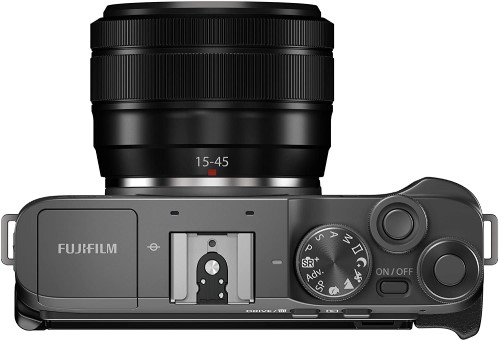 The Fujifilm X-A7 build is pretty basic. It features a microphone jack on one side and multiple ports on the other, including a micro-HDMI and a USB-C.

On the back of the camera, you will find a joystick with an eight-way functionality that you can use in tandem with the touchscreen. It also helps to control your autofocus point. 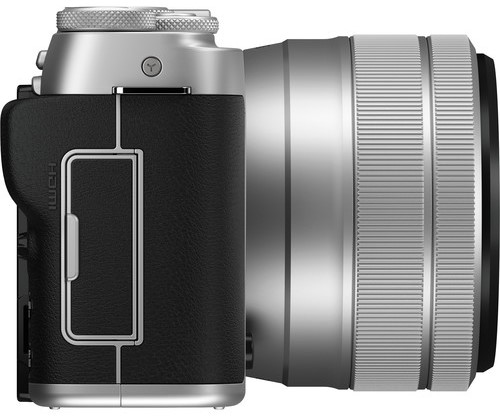 The bottom of the camera just features the battery door.

I do need to point out one frustrating part of the Fujifilm X-A7 handling. It doesn’t come with an EVF. Since it doesn’t come with an EVF, photographers are left using the screen for every single shot. While this isn’t a huge deal, considering the fact that the screen has such a fantastic resolution, it can get really tiring to hold your camera up and out to take all of your photos.

So, for people who are going to be taking tons of shots everyday and who maybe don’t have the best upper body strength, I wouldn't recommend this camera.

Another somewhat frustrating part of this camera is that its battery life is not what I would expect of a camera like this. I would double up and buy an extra battery as soon as possible to avoid any heartbreak.

Thank you to DPReview TV for the FujiFilm X-A7 video performance test above.

As mentioned by DPReview TV, the video specs on this camera are way, way better than they ever have been with the Fujifilm X-A line. This camera shoots full-width 4K video at up to 30p, it comes with a microphone input so that you can capture more crisp audio, and its autofocus system is vastly improved with 425 autofocus points. It literally has 9 times the amount of phase detection points as was present with the Fujifilm X-A5.

You also have the option of shooting in 1080p Full HD video at up to 60fps, or recording at 100fps for a slow-mo effect. 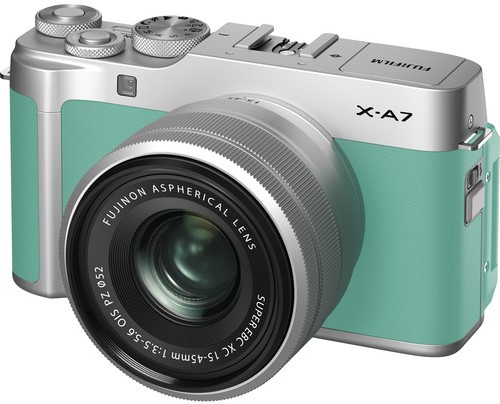 While this camera does have a microphone input, it unfortunately doesn’t have a headphone jack so you can’t track your audio levels while you’re shooting. However, I’ve been noticing that a lot of cameras that are marketed at entry-level photographers, or vloggers, have been leaving out a headphone jack since you don’t need it if you’re shooting yourself talking to an audience.

So, I don’t imagine this will be a huge deal to the target audience of the Fujifilm X-A7. 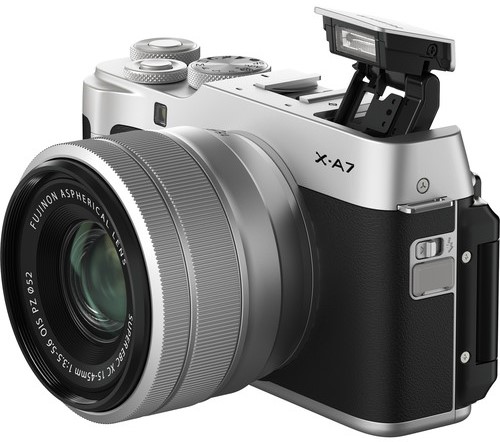 One reason a lot of people purchase Fujifilm cameras is for their film simulation. I’m happy to report that those same film simulation modes are present in the Fujifilm X-A7, even when shooting video.

One more downside to the Fujifilm X-A7 video quality is that this camera does not offer in-body image stabilization. So, make sure you always carry a tripod with you if you’re planning on shooting videos. 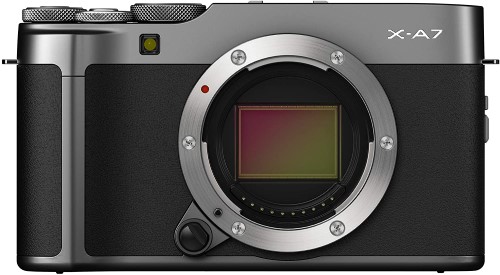 Given all of the specs on this camera, you wouldn’t be totally foolish to think that perhaps the price point of this camera will put it out of reach of most entry-level photographers (despite obviously being marketed to them).

The Fujifilm X-A7 price, when it first came out, was $700. I remember my first camera and I know that I didn’t spend anywhere near this price on it. I couldn’t have afforded to and I don’t think that I’m in the minority on that point.

Still, since the Fujifilm X-A7 was released a little over a year ago in the fall of 2019, its price on the used market has slowly been dropping. It is now easy to find a used Fujifilm X-A7 for as little as $500, which is much more reasonable.

If you’re interested in picking up a Fujifilm X-A7, then you need to be perusing a used camera marketplace and MPB should be your first stop.

The reason why I say this is that I actually trust MPB. I don’t trust random sellers on Ebay or Craigslist and I definitely don’t trust some of the smaller, more questionable used camera sites that were obviously not created by photographers.

MPB, on the other hand, strictly hires photographers and videographers to rate each piece of equipment that they sell. This means that their grading scale for their equipment, which ranges from “faulty” to “like new” is actually accurate.

Plus, you can make your life easy and trade in your old equipment and use whatever money you earn from that trade-in to put towards your new Fujifilm X-A7.

As of the publishing of this article, there were no used Fujifilm X-A7 bodies available on MPB, but they rotate through hundreds of products every day and this camera is definitely worth the wait.

You can check out MPB’s Fujifilm X-A7 page here.